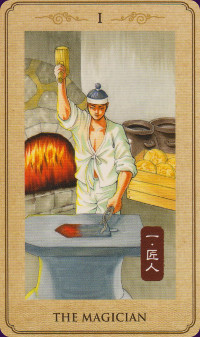 The Korean Cultural Heritage Tarot is a 22-card set celebrating Korea's religion, history and culture. The delicately illustrated cards follow traditional tarot symbolism and have titles in English, though are accompanied by a companion book only in Korean. 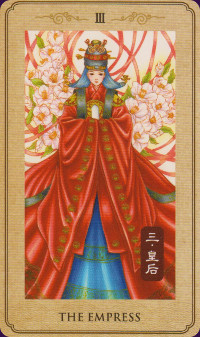 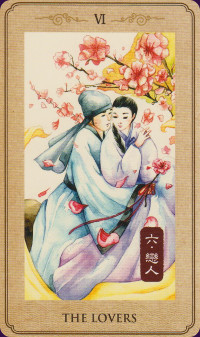 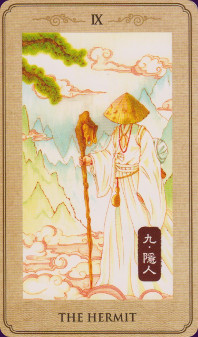 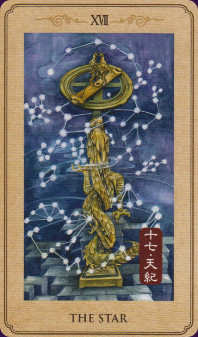 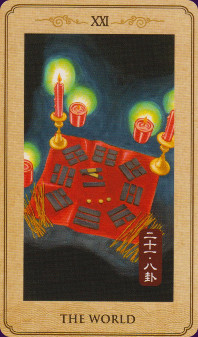 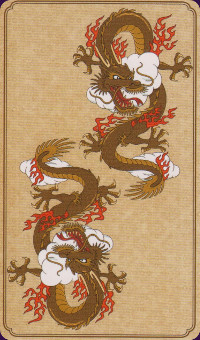 The Korean Cultural Heritage Tarot Card deck is a Major Arcana only. This deck is beautifully illustrated, created with an extremely light touch, featuring images from Korean myth and legend.

There are many striking images in this Arcana; both the High Priestess and The Empress wear sumptuous traditional Korean robes, and inscrutable gazes. The Lovers are depicted by a sweet couple embracing under a fall of cherry blossoms. The Chariot is a terrifying juggernaut bristling with spears; The Wheel of Fortune is most appropriately depicted as an unopened gift, resting on a background of multi-coloured sashes. Death shows a faintly sinister couple in a swirling black robes, with three people in yellow bowed down before them. The Devil is a pretty young woman with abundant red hair, holding a giant pearl – the very essence of temptation. The Tower shows a stone castle or perhaps city gates in a state of collapse, topped with a raging inferno. The Sun is a plain altar dressed in an orange cloth surmounted by two candles and an incense burner, before a vast red curtain. The World is a candlelit board marked with the 8 trigrams that are the foundation of the I Ching. All the cards have fascinating and thoughtful images that faithfully convey the true essence of a Major Arcana.

This is a standard Major Arcana – 22 cards, with card titles and ordering that follows A. E. Waite’s tarot standard. The cards measure 65 x 110 mm which makes them about the same size as a deck of playing cards. The card stock is fairly lightweight – the cards are quite flexible with a smooth and very glossy finish. Being the same size as a regular playing card deck, the cards fit to one’s hands nicely and shuffle easily. While the glossy covering gives them some degree of protection, these cards will not withstand heavy usage and rough handling, as they are a little flimsy.

The artist's style is a cross between traditional and pop Asian style where one can see such diverse influences as Ukiyo-e - Japanese woodblock prints, and manga, as well as Korean popular culture. The images are peopled with ethereal characters whose facial features are delicate but for their disconcertingly direct stares, their idealised figures are willowy and elegant. The pictures for the most part convey the intent of the cards very well.

The art work is largely rendered in pen and ink. Each image has a well-defined beige border, and a very fine line of dark brown frame. There is a scale-pattern in tan at the base of the card, and in the same colour an abstract cloud pattern at the top. The number of each card is given in Roman numerals at the centre top of each card, and the title is given beneath each image. The print on the back of each card is 2 classic Asian style dragons facing each other, the image is fully reversible.

The print quality is excellent. The images are clear and bright with no colour bleeds or blurring. The artists choice of colours varies from brilliant reds through deep purples, airy leafy greens and fiery yellows; and conveys an air of both delicacy and passion.

The cards are part of a book and card set. They come packaged in cellophane, and framed in soft plastic foam which affords them some protection. This and the guidebook come covered in a plastic fold-out folio.

The 126 page guidebook is written in Korean, which unfortunately prevents me from giving a comprehensive review of the contents and quality of information. However the guidebook is well illustrated with full-colour reproductions of each card, as well as an introduction to the cards, information about the deck, and apparently plentiful information for each card.

This is an extremely pleasant Major Arcana, without any confronting elements. It is functional, yet retains an air of mystery. It is suitable for experienced readers and collectors alike. If you have an interest in a Korean myth and legend, or an interest in Asian, specifically Korean culture then you will love having this check in your collection.