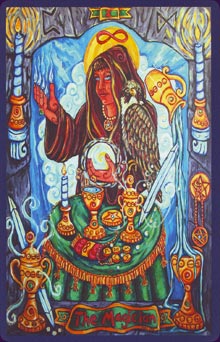 The Pearls of Wisdom Tarot has 78 vivid, colourful, busy scenes that are full of life. The artist calls the deck a 'painted journey' through the tarot, that allows the reader to find their own pearls of wisdom in the images. The first and second editions are out of print, but the third edition is available.


Card Images from the Pearls of Wisdom Tarot 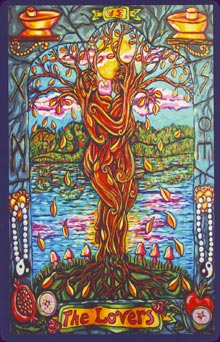 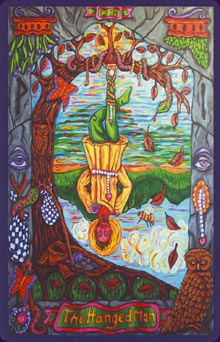 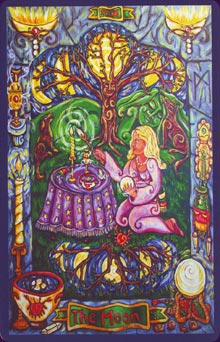 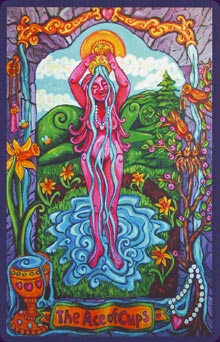 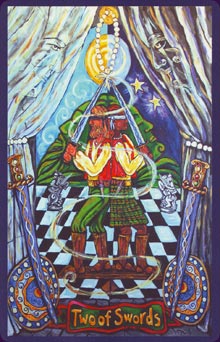 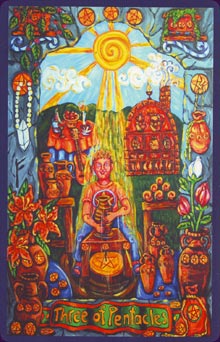 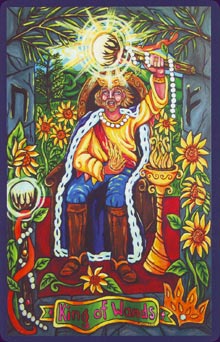 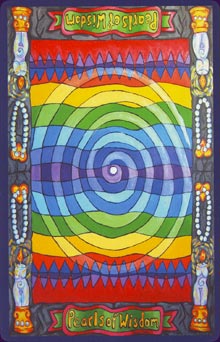 The creation of the “Pearls of Wisdom Tarot” acted as a journey of healing for Roxi Sim, following the death of her mother and her nine year old son, and the deterioration of her own health. She terms it a “painted journey” through the Tarot. The Hermit, the Ace of Pentacles, the King of Cups and the Magician are guides who manifested in the paintings. Caeli appears as the Queen of Swords, due to her clarity of vision. Sim’s words to the reader are that she hopes that they find their own “pearls of wisdom” through working with this deck.

In the Author’s Note On The Tarot, Fullbrite and Sim share the view that the Tarot is a pictorial summary of all the divine faculties common to humanity. It acts as a tool to light the way towards harmony with your purpose. I think that this is very well put.

The deck follows traditional structure, with the suits being Wands, Cups, Swords, and Pentacles, and the Court Cards entitled Page, Knight, Queen and King. The Major Arcana carry traditional titles, with Strength as VIII and Justice as XI. There are two extra cards with the deck: an information card with the name of the deck, and the names of the author and artist, and a second card with the following text: “To spiritual seekers, May you find some of your answers herein.”

The cards come in a box that opens at the top, and are accompanied by a 3 ˝ inch by 4 ľ inch, 92 page companion book entitled “Pearls of Wisdom”. The front cover of the box carries an image of the Emperor, with images of the following cards on the back cover: the Page of Pentacles, the Fool, the Queen of Cups, and the Hanged Man.

On “The Pearls of Wisdom for the Major Arcana”, the authors say: “Each pearl symbolizes wisdom acquired through the hardship of experience or lessons. A pearl is created when an oyster deposits layers of luminous nacre around a grain of sand to protect itself from the irritation of the foreign material. Our life trials, losses, and disappointments are our grains of sand. Through layers of love for ourselves, others, and the Divine, we create our own string of pearls.”

There is a very short introduction to the Tarot, followed by three samples of different three card spreads, and a sample seven card spread. The cards are presented without scans, with a discussion of the cards, followed by commentary on the symbols chosen for the card. For example, on the Fool lists the following symbols: Pearl, Bumblebee, Butterfly, Dog, Dandelions, Chrysanthemums, Salmon, Three of Anything, the Sun, and the River. For Pearl, the commentary is: “I am a free-spirited child of the Universe, open to new experiences. Trusting my instincts, I move with the flow of life.” For Dandelions, the commentary is: “The birth of new ideas and beginnings.”

Each Minor Arcana card is defined by keywords. From the book for the Ace of Cups: “New joy. Emotional and physical well-being. A clearing and/or cleaning is taking place. Your heart blossoms in its newfound freedom. Each moment refreshes the spirit. Beauty and goodness overflow. You recognize the privilege of being alive and human. Sip the nectar of the Divine.”

There is an explanation of Rune symbols at the end of the book, as they are carved into the walls on the Portal of Perception on most cards, followed by a bibliography.

The cards themselves are 3 Ľ inches by 4 ľ inches, of sturdy, coated cardstock. The backs of the cards show the name of the deck across the top and the bottom, with panels/borders along the side made up of candles at each corner and strands of pearls in between. In the center of the card is a spiral with a white dot at the center. The background behind the spiral is wavy lines representing various colors in the color spectrum. There is a Ľ inch white border around the outer edge of the cards. The symbols used on the back of the cards are: pearls, rainbow, and flaming heads of the candles.

The card faces show a Ľ inch white border, with the card title/suit centered along the bottom of the card. There is a wide spectrum of colors used in this deck, but they are somewhat muted. The style of art is along the line of fantasy/primitive. The associations in the cards are to the Runes, the Triple Goddess Mysteries, and the language of plants and flowers.

While the artwork is well done, the cards are very “busy”. This deck would do well for someone who likes art decks, or for someone who is interested in working with non-traditional symbols. I would not recommend this as a deck for those learning the Tarot.

When I first laid eyes on the Pearl of Wisdom Tarot cards I barely knew where to look. Each card – not just the scene, but the entire card – was a portal into a tarot world of riotous, jewel-toned, vivid colour: from the colourful individual borders framing the scene, to the rippled, multi-coloured, polka-dotted title banners. It took my eyes a while to become accustomed to the incredible saturated colour – every hue is bright and glowing – skin is pink, grass is emerald, water is a strong, vivid blue.

Nature is everywhere in the cards. The artist, Roxi Sim, was strongly influenced by time in the Caribbean, and consequently the deck has a tropical, warm feel, lush with greenery and virtually fragrant with frangipani blossom. But these cards are not just pretty pictures. Roxi used her own art training and experience to create her own visual language; a unified language of symbolism in the tarot cards (and which is explained in depth in the companion book). She also painted these images during a dark and difficult time in her own life, yet created an incredibly light-hearted, joyful and alive tarot deck.

Several cards gave me a new perspective or interesting take on the usual interpretation. The Empress is breast-feeding a baby and has her eyes closed, which suggest to me a turning inward, a focus on instinctual, nurturing acts. In the Chariot, the charioteer has the reins pulled tight: the control and effort in guiding the horses is clearly visible. In the Two of Wands, a man stands between two path markers and paths; he is literally at a crossroads. The Five of Wands leans towards an interpretation of cooperation and teamwork, rather than competition. In the Two of Pentacles, the figure is juggling and also attempting to stay upright (successfully) on a tilting seesaw. In the Six of Pentacles, a man stands on four pentacles, with two in his hands, showing that his finances are under control but also enough to give.

The Pearls of Wisdom Tarot deck that I reviewed is the second edition. The first edition had rather distracting white edging to the cards, whereas the second has a much more unobtrusive dark blue/purple colour surrounding the artwork. The second edition also has an expanded companion book; it’s now 150 pages in length and with full-colour images of all the cards. The card meanings were written by Caeli Fullbrite, who spent time with each painting to uncover its secrets.

Now for the physical details. The deck has the standard structure of 78 cards and suits of Swords, Cups, Pentacles and Wands. The cards are sizeable at 12.5cm in height and just over 8cm wide. The backs of the cards show pearls, rainbows, ‘flaming heads of the Candles’, and a spiral, all of which have been carefully chosen for their symbolic meaning (and explained in the companion book).

The Pearls of Wisdom Tarot images are deliberately larger-than-life, complex and three-dimensional, and offer something new to look at each time a card is drawn. It won’t be a deck to everyone’s taste, but there’s a lively joy that runs through the cards and through the readings with them.