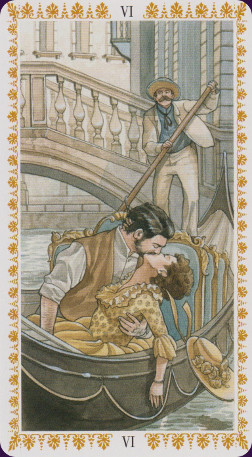 The Romantic Tarot is a 78-card deck of courtly love, emotion, passion and romance. It's set in the Victorian era and in the four most romantic European cities: the major arcana and suits are linked with Paris, Vienna, Venice and Rome. It's ideally suited for for advice, insight and solutions for matters of the heart.


Card Images from the Romantic Tarot 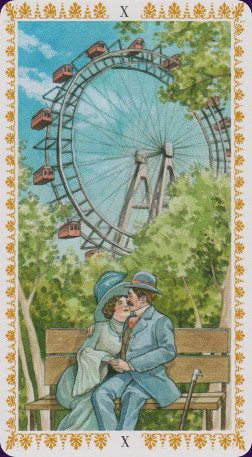 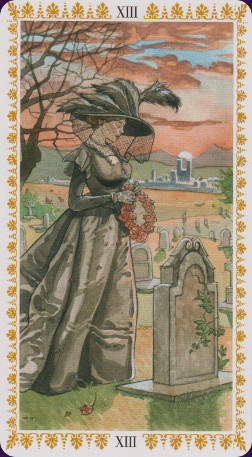 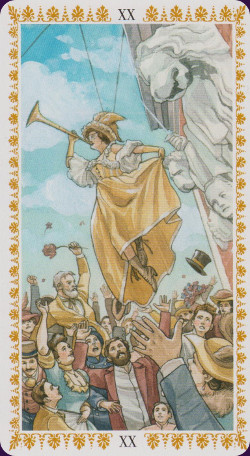 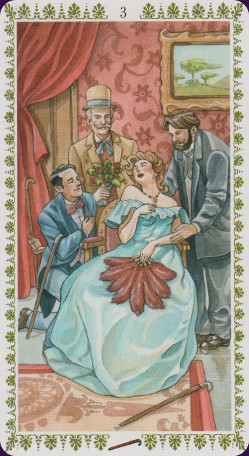 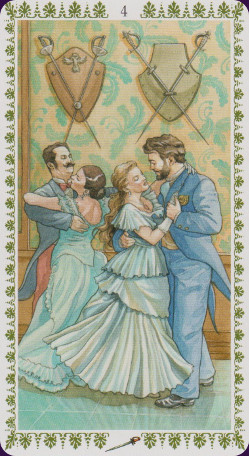 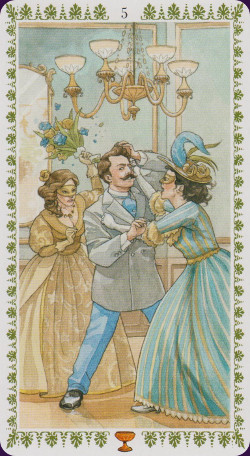 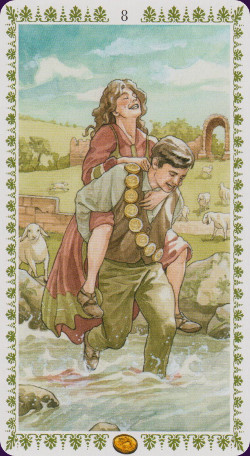 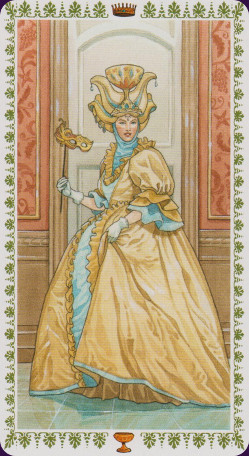 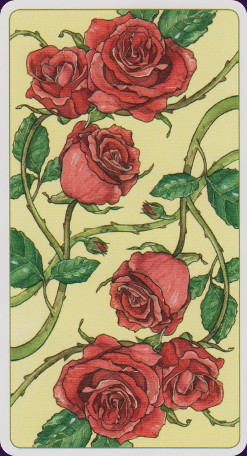 At last - a deck dedicated solely to uncovering and solving issues surrounding those most ubiquitous of questions asked of the tarot, namely love and romance. To be honest, I find it quite surprising that no one has thought to do this before – but here it is – aimed at answering all your romantic questions and concerns – The Romantic Tarot. Romance is the decks total focus – the illustrations, the divinatory meanings ,the reading layouts!

The setting for the deck is Europe during the Belle Epoque, the late 19th and early 20th century. The suits of this deck are each set in an eminently romantic city: Chalices are set in Venice, Pentacles in Rome, Wands in Paris, and Swords in Vienna. Each suit is dominated by a colour that compliments the romantic sentiment of its city setting.

Chalices and their generally positive outlook are hued in the golden–yellow colours of Venice; Swords, coquettish, flirtatious and daringly romantic are shaded in the blues of Vienna. Pentacles, earthy, natural, and practical in nature are the potent green of money and power associated with aristocratic Rome; and Paris' Wands are highlighted with the crimson-reds of passion, fire, and *amour fou* – crazy love.

This colour scheme is cleverly carried over into the Major Arcana, so that the reader can discern at a glance both the setting, and the emotion or intent associated with the card.

This deck follows a traditional format – 78 cards, 22 Major Arcana, 56 Minor Arcana. This is a fully illustrated deck. The Major Arcana is not titled, rather it has small Roman numerals at the base of each image. Nonetheless the cards are easily recognisable as a standard major arcana closely aligned with images from the Rider Waite Smith (RWS) Tarot. The Minor Arcana too, while not imitating the images from the RWS deck, project the sentiment of the card very clearly. The Court Cards, Page, Knight, Queen, and King are all indicated by small symbols at the top of the picture.

The cards measure 66 x 120 mm, which is a regular sized deck that fits comfortably into one’s hands (big or small). The card stock is good, sturdy without being heavy, flexible, and smooth with a low sheen finish. This tarot deck is easy to handle and shuffles nicely without sticking or being too slippery. The print quality is crisp and clear.

The artist, Guilia F. Massaglia has previously illustrated the Tarot Mucha – also set in the Belle Epoque. The artwork is detailed and delicate watercolours in a naturalistic palette of cool, calm colours. The print on the back, of crimson roses on a yellow background, is reversible.

The Little White Book by Emanuela Signorini has instructions in English, Italian, Spanish, French, and German. There is a brief introduction and overview of the Romantic Tarot. A simple four card spread it is included in the instructions. Each card is given a descriptive title such as The Secret Kiss (The Moon), The Cut Rose (Ace of Swords), or The Can Can (Four of Wands). This is followed by sage romantic advice, and be warned, it is not all hearts and flowers. Many of the cards illustrate the pitfalls and disappointments of love, and the divinatory meanings are unsparing, but not unkind. Finally there is a single word that summarises the essential spirit of the card such as – Trust, Control, Wounds, Courage, and so forth. The divinatory meanings are powerful, geared towards covering a vast array of possibilities regarding romance in its many forms from potential loves, established relationships, breaking hearts, lost love, pain and joy.

There are no reversed card meanings given for the Romantic Tarot.

If you find that many of your personal and/or professional tarot readings are about love and romance you will want to add this clever deck to your collection. If you like costume and historical decks, particularly those that focus on the Belle Epoque then the Romantic Tarot is a must. I would not recommend this deck for beginners because it is too specific in its focus.

Overall this is an intelligent and charming deck that is a welcome addition to the world of tarot. It would not surprise me if the Romantic Tarot went on to become a classic.

As the old saying goes ”Don't judge the book by its cover”. This concept is applicable when it comes to describing the Romantic Tarot published by Lo Scarabeo. Having a couple passionately kissing in a gondola in the front of the box and a lady dressing in ball gown with a tiara on her head at the back evoke the memory of a bygone era --- Belle Epoque, when life was pleasant and arts flourished. However, Romantic Tarot depicts more than just a fairy tale with a happily-ever-after ending.

Upon opening the box, we receive the warm welcome from the creator Emanuela Signorini and artist Giulia F. Massaglia. Together we start the journey to four European cities --- Paris, Rome, Venice, and Vienna to observe people from all walks of life by channeling the energy of four suits --- wands, pentacles, chalices, and swords.

With the wands energy we arrive in Paris, there we have the pleasure of witnessing the competition between suitors trying to win a lady's heart (3 of Wands), the courtships between lovers (5 of Wands, 6 of Wands etc.), and we are lucky enough to be invited to a wedding (4 of Wands). Interestingly, the courting ritual is completed in the Ace of Wands, showing a gentleman's walking stick with a lady's garter. Perhaps, in love, there is no beginning and no end.

With the Ace of Pentacles inscribed 'Omnia Vincit Amor' (Love Conquers All), we find ourselves in Rome where magicians (3 of Pentacles), artists (6 of Pentacles), and musicians (knave of Pentacles) performing on the streets trying to make a living. Yes, 'Love Conquers All', love is the fuel that gives us strength to survive in reality and to earn enough to support a family. At young age, we were naive like the children depicted in 2 of Pentacles, trying to win, trying to be a boss of everything resulting in the disharmony in a relationship. Luckily, with the help of the energy of pentacles, we have the chance to grow mature enough to understand the sharing of responsibilities in a relationship like the couple depicted in The Chariot.

Even with love, life is hard. Sometimes our emotions flood our life like the overflowing chalice depicted in the Ace of chalices. To release the stress, we find ourselves wandering in the narrow streets of Venice. In a square with no name, we might encounter another lost soul (2 of Chalices); we might find ourselves in a ball room filled with strangers (7 of Chalices); with a Venetian mask and a few drinks, you will discover that there is no gap between classes (6 of Chalices).

Life's sorrows are not reserved only for commoners. In the suit of swords, we witness scene after scene of life's sorrows (8 of Swords), heartbreaks (3 of Swords), and struggles (2 of Swords) in the high society in Vienna. Perhaps life is fair after all, no matter which class we were born into, we have lessons to learn because lessons facilitate growth. Growth happens when we let go of the past (Ace of Swords), when we have the courage to say 'no' to the old that no longer serve us. And that is how we begin the next journey, the next chapter in our life.

The journey with Romantic Tarot opens up readers' imaginations. It speaks to those who feel nostalgic towards the traditions and values of Victorian period. It shows you the reality and life as it is yet remains the charm and elegance of that particular period. It helps beginners develop their intuitions by using the story telling technique. It adds layers upon layers to enrich the advanced tarot readers' interpretations of the card spreads.