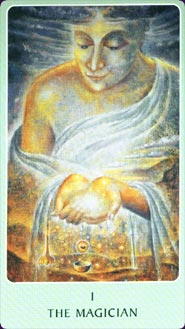 A tranquil and beautiful Buddhist tarot deck. The otherworldly art in the Roots of Asia Tarot was created by Thai artist Amnart Klanprachar and aims 'to be a wonderful passage to spiritual realization'.


Card Images from the Roots of Asia Tarot 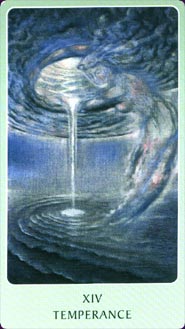 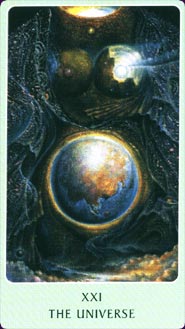 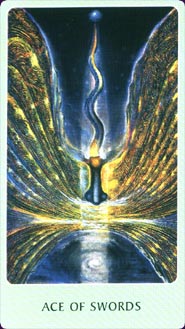 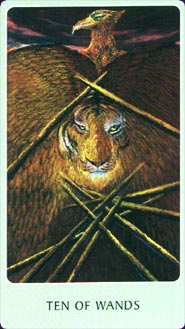 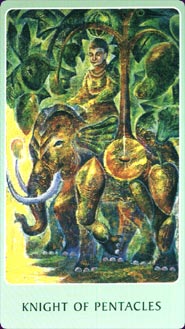 The Tarot Roots of Asia deck is just what its name implies, a Tarot deck with illustrations that were created from the perspective of Buddhism and Eastern Philosophy. The card titles, however, adhere to the traditional Rider-Waite convention. The deck was created by Thaworn Boonyawan and illustrated by Amnart Kanpracher. The boxed deck with included little white book (LWB) is produced by Belgium-based AGM AGMuller.

The deck is rendered in shades of golds, greens, blues, black and purples giving a mystical feel. Figures in the cards have a stone or carved quality but the shaded tones give them warmth and there is a graininess that adds to the carved stone effect. Many of the illustrations are collage-like, showing many elements together in more abstract-like groupings, while other illustrations are more story-like with more lifelike scenes such as those found in Rider-Waite decks. Some of the illustrations are stunningly beautiful and they are one of several reasons why I had to acquire this deck.

The deck material is quite good. The deck is a standard size and the card stock is sturdy. The cards do not stick together and are not overly glossy. They fan beautifully. The back of the cards are not reversible and depict a collage of figures surrounding a bright center which is part of a face. Two arms are folded at the bottom of the card in a meditative position. The fronts of the cards have a pale border that is thin around the top and sides but wider at the base to accommodate card titles. The border is plain and light and does not detract from the card illustrations in any way.

The deck is a standard 78-card tarot deck, with 22 Major Arcana cards and 56 Minors. The court cards consist of Pages, Knights, Queens and Kings. The pips cards are illustrated. While the card titles adhere to the Rider-Waite conventional titles for the most part, an exception is The World which is replaced by The Universe for XXI.

While the titles adhere to conventional Tarot, the card illustrations of the Roots of Asia are not at all like the illustrations associated with Rider-Waite decks, especially in the Majors cards. Although the traditional story of the Major Arcana depict a journey taken internally by The Fool in the Rider-Waite decks, the story takes place with external characters that The Fool meets and interacts with. The Roots of Asia Majors depict The Fool's journey as an internal one with few or no characters and the action taking place within The Fool. This is demonstrated powerfully in several cards, such as the Hanged Man, which shows the Hanged Man hanging within a figure's head, and The Tower, which depicts The Tower's destruction happening within a figure's body - near the heart. The deck is very powerfully and positively illustrated, so there are no cards that would cause a client to be concerned during a reading even when the more traditional cards such as Death and The Tower are pulled. However, this should not be misunderstood to mean this is a light deck. It is not. There is a depth to the deck that can depict dark aspects of a reading as necessary.

The traditional suits of Wands, Swords, Pentacles and Cups are maintained as well. The Wands cards are associated with the power of creative thinking and the development and ignition of energy and passion. Most of the illustrations on the Wands cards show the big cats. Swords are associated with air (including wind and breath) and most cards of the suit show birds. Pentacles indicate the gifts, rewards or potential within creation. Pentacle cards typically show forests and elephants. The suit of Cups is associated with water, flow, movement and imagination. As would be expected with water cards, most show fish or marine life and seem slightly more abstract than cards of the other suits. Frequently, the cards cross over and elements of other suits will appear in particular cards. I found this particularly powerful and helpful especially to new readers (such as myself) in understanding the sometimes subtle relationships between the cards across suits.

I was impressed with the LWB that accompanies the deck as it has much more than card meanings in it and the typical suggested spreads (like the Celtic Cross). There are three sections to the LWB. The first section provides a comprehensive listing of the cards in the deck along with a detailed description and meaning for each card. There is also an added 'divinatory key' meaning. These meanings may be used to supplement or replace more traditional card meanings if one wishes. However, I have had no problem reading this deck intuitively using only my experience in more traditional Tarot decks as a basis.

The second section provides three special spreads to use with the cards (the cards can be used with any spread one would use a traditional Tarot deck with also). These spreads are: The Five Faculties of Power Spread (5 card spread), Chakra Spread (7 card spread), and The Wheel of Wisdom Spread (23 card spread). The intent of the spreads is to expand the scope of the cards to include a focus on enlightenment, self-knowledge, and life wisdom through insight meditation.

Lastly, the book has a section dedicated to providing an introductory (yet comprehensive) instruction to Insight Meditation in the tradition of Theravada Buddhism. I found this section of the LWB particularly interesting as I have recently been working on my meditation skills, and the LWB even includes information on meditation while walking and reclining.

In my opinion, this deck is a great deck for someone beginning in Tarot that wants a deck that has a different look to it as well as someone who is interested in exploring their own inner spirituality. It is as easy to use and intuitive as a Rider-Waite and as thought provoking as a Thoth.