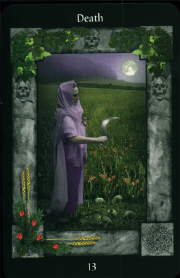 Based on the Celtic Pagan perspective, the Sacred Circle Tarot uses photographs of sacred sites, as well as traditional plant and animal associations from Ancient Britain. The artwork is a mixture of hand drawings, photography, and computer generated images which doesn't always blend well, but overall the deck is quite charming. 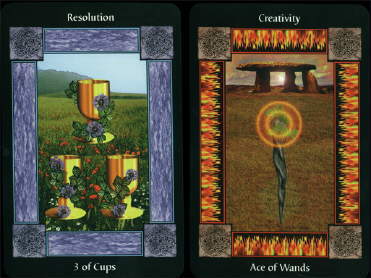 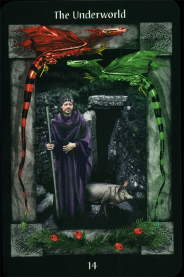 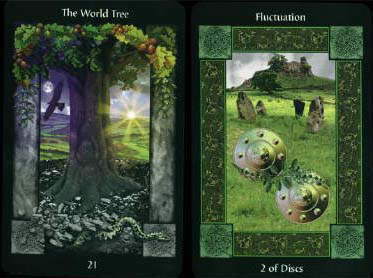 Though my current knowledge of and experience with tarot cards are rather limited compared to those of other users, the Sacred Circle tarot is a divinatory treasure. Upon receiving the deck and the accompanying book as a holiday gift years ago, I was immediately captured by the visual beauty of the set. Each of the seventy-eight cards boasts a mystically stunning art piece which is comprised of photography (specifically that of sacred landmarks within Britain and Ireland, such as Stonehenge), CGI (computer generated imagery), and traditional drawing techniques, all of which are melded together beautifully and seamlessly. But don't let its breathtaking outward appearance fool you. This set is definitely not one that's all style and no substance.

A uniquely interesting aspect of the Sacred Circle tarot is that it's of a Pagan nature while many of the tarot decks of previous decades were created from a Christian perspective. This perhaps makes this particular deck all the more personal and meaningful to those of us who follow Pagan (if not specifically Celtic) beliefs. Evidence of this alternative viewpoint, aside from the more Nature-revering artwork, is the alteration of some of the cards of the Major Arcana. For example, the more Christian representation of "The Fool" has been changed to the Pagan representation of "The Green Man," "The Heirophant" transforms himself into "The Druid," and "The World" adds a third word to its title, hence becoming "The World Tree." With a wealth of informative text, Sacred Circle's book provides not only detailed divinatory meanings of every card, it also offers very thorough insight into the symbolism of each individual character, animal, season, Element, and more.

Though not a set designed for beginners of this form of "fortune-telling" (as it were), the Sacred Circle tarot is certainly wonderful to enjoy as well as to employ.

One wonderful thing about this deck - and there are many wonderful things about it - is the deck's rejection of quasi-Christian imagery which pervades so many Tarot decks. Instead, Franklin and Mason's cards are Pagan in emphasis, which enriches the divinatory meanings, rather than detracts from them.

Then, there is Paul Mason's fusion of computer graphics and photos which, fulfilled the artist's aim stated in the Sacred Circle Tarot book, to "... produce a tarot that had some of the naturalism of photography, but also... magical realism."  I find many drawn decks unsatisfying because the artwork is unimaginative, primitive or even - let's be honest - plain poor. So often, the artist fails in conveying the vision of the deck itself - or the artwork is a distraction. But in the Sacred Circle tarot, the artwork more than matches the well thought out cards and their many layers of meanings.

Yes, this is NOT a beginners' deck, but plenty of other decks are. It has greater depth and more subtleties than many other decks and manages to combine its rich, intelligent detail with drop-dead gorgeous artwork.

My all time favourite deck!

I am a Tarot beginner.  I purchased this as my first deck and, to be completely honest, the reason for my choice is that I saw the pictures here on aeclectic.net and thought that the cards were "pretty."

I love the deck for a lot of reasons.  The artwork is beautiful (though I agree that some of the photography doesn't blend well with the computer-gen art on several of the cards).  The cards are large, so the details and symbolism are not lost.  The choice of landscapes and plantlife depicted on the cards are always appropriate and, well, just lovely in general.

What I do NOT like about this deck is the book.  This is not a deck geared to beginners and, though it has its merits, the book is confusing at times.  The deck is not a traditional tarot deck, and several broad liberties have been taken in renaming and redefining parts of the Major Arcana.  Only the barest descriptions and explanations of spreads are given (though quite a few are shown).  More time is spent on the meditative qualities of the cards than on their use and/or meaning in divination.  The divination paragraphs regarding each card are often wordy and full of "fluff" that goes with the lore and symbolism that the author put into the imagery.  There is no discussion of the placement of different cards in the spread or the relationships between cards.  In short, it is a book written with the idea that its reader will already know quite a bit about Tarot.

This deck is nicely done.  I've truly enjoyed it.  I feel connected to the deck, and I'm glad it was my first choice.  My advice, however, to any other beginners, is that you start elsewhere (like the Rider deck which has SO many books and tutorials written about it) before diving into a "different" deck like this one.

The Sacred Circle is very different from the first deck that I bought. The first one was Christian in nature, while this one is pagan. They are both my treasures for divination and in a very short span of time, they have been so cooperative to me whenever I ask them for help or guidance.

I saw this deck when I was getting desperate about not finding the other one that I was searching for. The first thing that captured my attention when I saw this deck is the imagery and artistry, and of course, I felt the connection with it. When I saw the images of the card, it felt to me as if they were moving and that they have something to say to me. The artwork is not just superb, but there is a connection between the person, animal and plant life that it on every single card. I love the details that it presents and since the symbolism and the images are not blurred nor lost, I get a different feeling and meaning for each card, though I may have seen the particular image appear in my other spreads for other people. One more thing about the deck, I love the way you can use it not just for cartomancy, but you can also use it for meditation.

Another thing that I love about the deck is the book, it is so long and detailed that it will in a sense "bore" you with all the explanations for each and every card. The reason why I love it though is it encourages the use of intuition and your own personal interpretation for the card, you would not want to start your reading with the book in between your fingers.

What I do NOT LIKE about it is the size, I have small hands and sometimes I find it hard to shuffle the deck. A bit on the book though, it is confusing at times, this is due to the long and sometimes, winding explanations of the individual card.

This is not a deck for beginners, it is more suited for those who have wider and deeper knowledge of the tarot. I do not discourage beginners like me though to buy the deck, you can, for as long as you feel that there is a certain connection between you and the deck. Trust your intuitions when trying to understand the meaning of the deck and interpreting it. Try to make a journal of your interpretation, you will be surprised that the interpretation that you have for the card today may not be the same as the one you may have after a few days. And lastly, do not memorize the book, it is not the tool for interpretation, but it is merely a guide in understanding the deck.