Servants of the Light Tarot 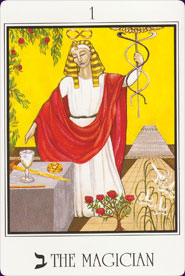 The Servants of the Light Tarot is a collaboration by English Traditional Witch, Dolores Ashcroft-Nowicki (who also created the Shakespearian Tarot) and the authors of the Gill Tarot and Magickal Tarot (Gill completed the majors, Clark the minor cards). The art in the major arcana is particularly deep and vibrant.


Card Images from the Servants of the Light Tarot 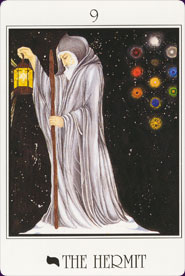 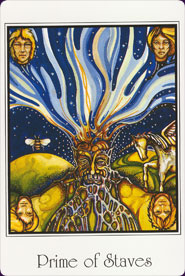 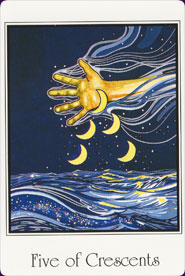 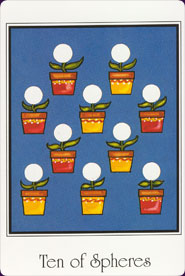 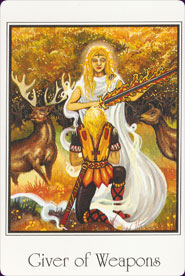 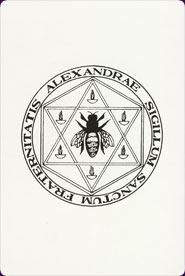 Servants of the Light Tarot Review by Nisaba Merrieweather

This deck and book set, currently out of print, richly deserves to be recognised for the gem it is, and brought back into production and common usage. The book is clear and lucid and very helpful in teaching the use of the deck, but really skates over the surface of the symbolic richness of the deck. I originally read the book, then spent years becoming familiar with the deck on a much more comprehensive level than the book allowed, then the deck and I parted company for a few years. We have just recently met up again, and it is every bit as delightful and penetrating as I remember.

It is arranged in the usual Tarot structure of a Major Arcana of 22 cards, and a Minor Arcana in four suits: the suit formerly known as Discs, Pentacles or Coins here is called Spheres, Cups have been changed to Crescents, Wands to Staves, and Swords to Weapons. In addition, Staves and Weapons have swapped Elements, with Staves being Air and Weapons being Fire. Dolores Ashcroft-Nowicki was very active in Thelemic circles, and this strongly influences the symbolism of the deck. Many of the meanings of the Minor cards in particular are closer to Thoth meanings than Rider-Waite meanings – but they don’t really need learning. The illustrations of this deck, even the simplest of them, tell you everything you need to know.

The Court Cards have all been renamed, also: Kings as the origin of the suit are renamed “Makers”, Queens as the distributors of energy are renamed “Givers”, Knights as the active principle of the element are renamed “Users” and Pages as the upcoming principle of the element are renamed “Keepers”. They follow an even gender-divide (male-female-male-female), and each card shows its own character plus the one before or after it in the background of the image, as the suit-objects are seen as magical talismans passing through their respective hands from one to the other. That lineage is present in all the court cards.

The artistic styles of the two artists are quite different, yet work well together. Looking at any spread on a table, it is easy to tell at a glance which cards are by whom, yet they do not clash, they seem to belong to the same world, even if to different countries in that same world.

Jo Gill’s Majors are characterised by luminous colour, a strong sense of design and a deft hand, and abnormally large eyes, making the characters seem slightly alien or at least affected by glaucoma. The eyes are strangely disturbing in all of them; but as we are dealing with archetypes here and not normal characters, it is entirely appropriate that they are arresting and do not make us too comfortable.

Overall, the images in the Majors are reasonably standard – anyone would at a glance recognise any of the cards. They do, however, have their own original “spin”. For example, the Fool shows a brightly lit mountaintop scene with a bemused dog on the peaks, looking up at a brightly-dressed young man carrying his karmic kit stepping through a frame from a world that is plunged in night, one foot in the dark and one in the light.

As I said before the deck has strong Thelemic influences, and I ended up taking out a number of decks to be sure. The Emperor is the spitting image of the Crowley-Harris Emperor of the Thoth deck: instead of having the whole card executed in reds and oranges he is set in just such a landscape, but is clad in contrasting silvers, greys and blues so as to stand out from his environment. He also has a warrior’s helmet rather than a ruler’s crown, but in all other ways his accoutrements and posture completely mirrors the Thoth Emperor. He is sitting on a grey sacred cube, and his goat, instead of being an actual animal, is inscribed on that cube.

The Chariot, like the Fool, shows the Charioteer in a night-time starry rectangle (this time inside the Chariot instead of being a frame) surrounded by day, so again there is this sense of travelling between dimensions or times. The Chariot seems a ceremonial fixture in front of a city, though, a kind of temple-cum-gatehouse, flanked by two heavy-breasted sphinxes in black and white. Like the RWS Chariot – the Chariot is going nowhere, but unlike the RWS Charioteer, this dark-skinned man probably is.

Justice has been renumbered eleven, unfortunately – many Thelemic decks including the Thoth and the Wang GD, retain the original numbering, which works very well esoterically. What I like about this card is that the Egyptian god-figure pictured on this card is seen face-on – but the pillars to either side of him are shown at an angle, as if we are at their base, looking up their length. I like the eerie twisting of dimensions that this use of two different perspectives gives the card.

The Wheel of Fortune is spherical rather than circular, but otherwise very closely related to any number of other Wheels. The Hanged Man has a 1980s glam-rock look, with his bleached-white, permed hair and his glam-rock clothes. Interestingly, he hangs from a loop of flowers over a chasm – but behind the chasm, which is full of night-sky, there are solid mountains resting, apparently, only on the glow of the young man.

In Death, I love the reference to Schubert – “Death and the Maiden” – and also to David Ireland, an Australian author: “The Glass Canoe”. Ashcroft-Nowicki was apparently very familiar with Ireland’s work, I read somewhere. This is probably one of the two finest Death cards in the whole of Tarot history, to my taste, anyway.

The iconography of the rest of the Major Arcana are fairly standard 20th century stuff, but beautifully executed and with symbolic details in all cards that make them both beautiful, and beautiful to work with. And in every card those huge piercing eyes, transfixing you to the spot.

The Minor Arcana are quite different. The Courts are lavish, detailed, almost busy but exquisite, and work symbolically on a whole host of levels. The pip cards, though, seem to fall into two, or possibly three, camps. There are some that are so sparcely illustrated that they almost qualify as unillustrated decorated pips, and others which are richer and more fully illustrated.

I have a theory that even the best Tarot designers will have issues with some of the archetypes expressed in Tarot by reason of being members of the human race. And of course, if an image or idea challenges you, you want to deal with it quickly and get it out of the way. Or you may simply not have a handle on it, and may not give it the time it needs for full expression. I fancy I can see something of Ashcroft-Nowicki’s foibles in the cards which are fully illustrated as opposed to those which are more spare.

All the Aces are as intricate as the Court Cards: full of their Elements and full of details that are very useful as intuitive triggers. In the suit of Weapons, 2-5 are very plain, whilst 6, 8 and 10 are exquisitely detailed and interesting. With Staves, it is 2-6 that are very plain and almost unillustrated, and 7-10 are rich and wonderful, with eight and nine being arguably two of the three or four best cards in a superb deck.

The suit of Spheres is more illustrated, and a sub-character, not the Fool but probably his father or uncle, a Jester in red and green motley, emerges in this suit and populates it. I have no idea why he doesn’t journey (or have equivalents) in the other suits. It’s really only the Two Spheres that is decorated instead of illustrated: we see the jester doing things as varied as crying over smashed eggs (spheres), tossing balls of light down a canyon, and scrying in a fortune-teller’s tent. The Four Spheres is almost a direct quote of The Thoth’s Four Disks: the Thoth’s squareness in a corridor is translated into a cube hanging in space.

Crescents are the only suit that is fully-illustrated. Gorgeous seascapes and mer-people occur in every card. The “Crescents” are either crescent-moons, or reflections of the Moon on the surface of the sea, and the Maker of Crescents is pulling a Crescent off the edge of the Full Moon to manifest that energy in the world. Again, this suit has some outstanding cards, notably the hand breaking through the dimensions in the Five, the drowning/meditating woman in the six, and the eyes at various stages of watchfulness in the Seven.

Overall, this deck is one of the most spectacular it has ever been my privilege to handle. In its day it was probably the most gorgeous-looking deck around: now, with the development of people like Ciro Marchetti, the Magic Realist Press crew and others, there are probably visually stunning decks around that compete with this deck. But very few of the top-end glamorous decks would be as solid and impressive and weighty symbolically, few would be as deep and endless, few would be as penetrating. I have seen copies of this deck being sold second-hand for anywhere between $100 and $350, and I can tell you straight off: if you have the money, get it. It is completely worth it, and always will be.


Complete Details of Servants of the Light Tarot


Similar Decks to Servants of the Light Tarot