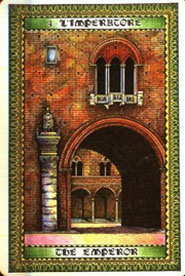 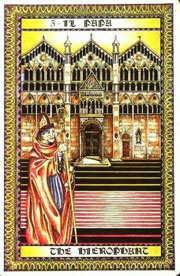 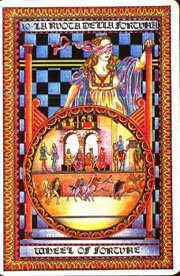 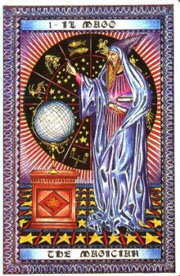 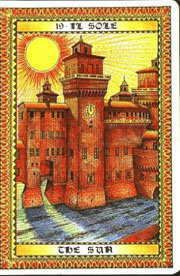 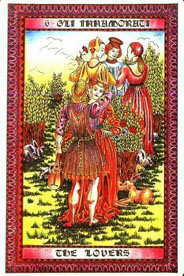 I bought this years after the deck first appeared, from Tarotgarden.com, when many of Amerigo Folchi's Italcard titles started to become 'unavailable' on alidastore.com and trigono.com. An E-bay purchaser fell through on this deal, and it was money saved in my account with such a very special deck in mind. I had just started to study direct my evening and other studies and was gathering resources and readings on Italian Renaissance poetry.

When the green and beige silk-screened box arrived, I began looking carefully at the online reviews that I had bookmarked. The reviews on TarotPassages.com and Wicce.com were all about the details on the cards and the historical notes that were included in the little green booklet. It was well-done for what was considered a 'game suitable for all children'.

The majors are done with historical personalities from Ferrara. Ferarra's rulers were notable in the flourishing times of the Northern Italian Renaissance. Scenes and events mainly of the 1400s under the 12th Marquis of Ferarra, Niccolo III to Duke Borso seem to be highlighted. Many personages are posed as if they appeared from mural or triumphal stage setting. Amerigo Folchi says many of the scenes can be found in the remaining frescos of the Hall of Months in the Schifanioa Palace.

In terms of artistic style, the colors of the costumes are blended well in friendly, eye-catching tones. However this does follow some of the more gruesome history of the region, where the Devil and Tower depict scenes that remind one that Marquis Niccolo III was known for ordering the deaths of his young second wife and first son after discovering their adultery. The Hanged Man is less a voluntary sacrifice, more likely the traitor. The medieval and dark side of the duchy is not overlooked.

On the plus side, the Venus figure on the float for the Chariot reminds one of the beautiful fresco showing Venus' triumph over Mars and side picture of the three dancing graces. The Lover card also shows a lovely setting where young people gather an allegorical garden. The Moon shows a languid woman lying near a cistern--the booklet explains the mysterious wells in the Schifanioa Palace and notes the Moon exerts mysterious influences over women and dogs. This deck is suggestive of old-fashioned stories and an old style of meanings for the cards.

In some cards, the setting is lovely, but the face of someone depicted is somewhat less expressive or simple in comparison. The Star does not actually name anyone in particular, so the woman's face up close looks like someone hurrying away from a building. The description explains it is the Schifanioa Palace made for rest and recreation and it's gardens.

Folchi follows a Milanese/Marseilles style of Justice being eight and Strength is eleven in the majors. The minors and courts blend in with the use of historical paintings and colorful costumes in pastoral settings. His depiction of Aces through ten follow a scenic Rider Waite Smith style and his two-to-three sentence descriptions mirror the Waite divinatory meanings.

Folchi did a series of decks for Italian cities and the copyright is 1987, with the Felicita being in his credits. This deck was done before the Palio de Pistoia and some of my initial theme favorites of his, the Columbus and Mitilogical. His more recent and affordable decks include the limited edition Millenium Tarot, Tarot of the Master for AGMueller and the very beautiful Tarot di Sissi.

This deck means a great deal to me to spur my Italian Renaissance studies and fits in with my collection themes of historical and literary decks. I use it in small readings for inspiration on what topics to study related to historical Ferrara. If a Folchi deck in good condition comes your way and enhances your studies, do consider the price and budget. I don't ever think that I will recoup resale value on this and it is a far cry from my usual used bookstore finds under $10.00.