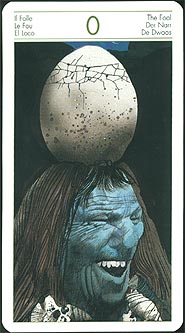 Tarot of the Origins

The Tarot of the Origins is a deck with a prehistoric theme. Wild animals, hunting, bones, blood, trees; images of the lives of our Stone Age ancestors.


Card Images from the Tarot of the Origins 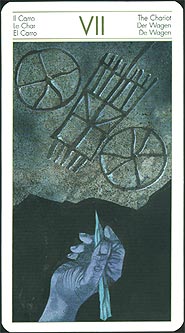 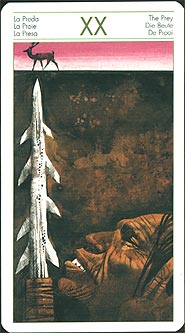 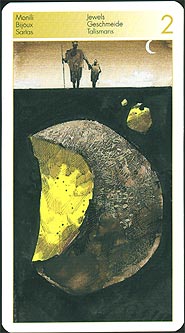 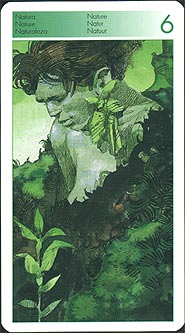 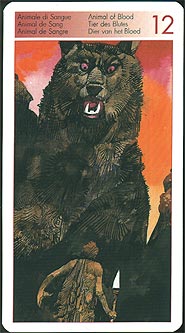 This deck started speaking to me before I even got it out of its packaging. I could hear a deep male voice speaking in an ancient voice telling me that a journey was about to begin. I had no idea how true these words were!

I took my new treasure, snuck into my room, closed the door and opened my Tarot of the Origins. I slowly looked at each card, one by one, allowing the enormity and depth of each drawing to imprint itself into my very being. I felt like a magical rite was taking place... I could feel my breath, I was almost hypersensitive as I soaked up these intricate works of art.

After I went through all 78 cards, I began to shuffle the deck. As I did this I read through the meanings that came in the LWB. I liked the short explanations that were given....just enough for direction but not a spoon-fed definition. The cards began to jump out of the deck. I gently placed them into the monolithic circle with a man in the center as recommended in the LWB.

I was not surprised to see the depth and piercing accuracy of the layout. They spoke truth, honesty and with such 'pull back the curtains and see the light' clarity.

Then I picked up the cards and shuffled again. This time allowing the cards to jump out and placing them in my usual layout, the Tree of Life. Again, no surprise when the accuracy was chilling. The honesty of these cards and a pleasant perk. I love it when a deck doesn't let you bull sh** your way through the reading. Pulling your face up to the mirror and forcing you to look at the truth is refreshing. I love these cards.

Using these cards when true clarity is needed in a situation is a perfect venue for this deck. I would not recommend them to someone who wants to mold cards to read as they wish because these cards don't work in that way.

The images on the cards are a little disturbing when you first look at them, but after a quick read of the LWB, any fear is dissipated and replaced with respect. At first I was afraid that the lack of a multitude of colour would be limiting and I was very pleased to find that it isn't. The drawings create the depth that many other decks use colour to achieve.

I love the way the faces in this deck are all so varied and different. No two are the same and they all speak something different to the querent.

The recommendation that I would like to make to everyone is:

Please take the time to experience this deck. Don't just look at the images and decide that some of them are too dark, or the four colours are too narrow to give any true depth to your readings. I believe that you will be as pleasantly surprised as I was that these are cards are very perceptive and deep... even without all the colours of the rainbow to assist them.

The Tarot of the Origins is a prehistoric tarot deck. It is a natural tarot (in the fullest meaning of the word), with trees, bones, rocks, wild animals and people dressed in loincloths predominating the pen-and-ink scenes on the cards.

Being a Lo Scarabeo published tarot deck, the cards are multi-lingual. This deck is more so than most, with the title repeated in six different languages (Italian, English, French, German, Spanish, and Dutch).

The four suits have been re-named from Wands, Swords, Cups and Pentacles to Nature, Blood, Souls and Jewels, and assigned individual and meaningful colours of green, red, blue and yellow. The basic pen and ink drawings of the minor arcana cards have been coloured with the suit colour dominating, whereas the major arcana have earthier colours of browns and greys. The backs of the cards are coloured sepia and show a watchful man wearing a bone and skull necklace.

Each suit card has its own descriptive title, not just the court cards. The court cards are Child, Animal, Woman and Man, rather than the typical Page, Knight, Queen, King. The names of the Nature suit are given for example below. The titles for the other suits are very similar, just replacing the suit name.
Seeing as there have been substantial changes made to the meanings and names of the cards, the little white booklet's ten to fifteen words of description is not enough. This deck is badly in need of a companion book to further explain some of the symbolism and images used.

But it is a primal, instinctual tarot deck appealing to the primitive self. (Perhaps that's why there is no companion book.) Some cards in the Blood suit are very menacing, the pinkish-red of the suit appearing as though viewed through a berserker's eyes, not to mention the demonic looking bear on the Animal of Blood card. There are also plenty of well-formed naked women, but for some reason the men look much more prehistoric.

The Tarot of the Origins is a deck overflowing with raw energy. It is an interesting tarot deck to look at, though an affinity with the images may assist in reading with it.

I’ve just spent a happy half hour looking through my Tarot of the Origins with a magnifying glass.

Strong abstract design, bold use of colour, strikingly dramatic composition and complex, satisfying pen-and-wash textures – these are the qualities Sergio Toppi’s artwork has given to the cards that makes them my favourite deck. Simply considered as paintings, every one is beautiful and satisfying. The imagery locates the various figures in a fairly consistently-imagined prehistoric or “primitive” situation: the landscape itself often no more than a suggestion of rainforest or rocky desert, with an occasional standing stone or tree. And there are birds and wild animals – rhino, hippo, ape, bison, deer and a gigantic bear. Almost every card has a human figure, often shown in extreme close-up that leaves little room for any background, and many of the figures are adorned with either tattoos or jewellery of gold or bone, or both. Each face is like a portrait of a real individual.

The structure of the deck matches that of traditional decks, with four suits of ten numbered cards and four court cards, plus 22 trumps. The symbolism of the trumps is broadly in line with tradition, but many are renamed, so we have II to VI respectively entitled The Great Mother, The Mother, The Father, The Shaman and Union, VIII Abundance, X to XII Time, Creative Power and The Sacrifice, XIV to XVI The Source, The Demon and The Menhir, and XX The Prey.

The four (renamed) suits are colour-coded, with the card illustration having a limited palette in which the ‘key’ colour predominates: this I find very visually pleasing as well as technically helpful in doing a reading. The suit of Soul is blue-toned, Jewels yellow, Nature green and Blood red. The Soul (water) suit is supposed to equate to Chalices, Jewels (earth) to Pentacles, Nature (fire) to Wands, and Blood (air) to Swords – but the correspondence, to my mind, is less than exact – which is fine by me, as it actually makes me think in a fresh way about the elements and the nature of the suits. The “pip” cards are numbered, but each number also has a name, which appears in the LWB but not on the card: in order from Ace to Ten they are called Etching, Age, Mask, Bones, Stone, Rite, Era, Spirit, Birth and Environment. The four court cards are Child, Animal, Woman and Man.

On the face of it, the concerns addressed by the cards seem limited to basic survival and the expression of rudimentary spiritual or creative urges, which ought to make them less than helpful in reading for a twenty-first century client. But thinking behind our thin veneer of civilisation, reading between the lines of the LWB, letting one’s intuition work on the images (or vice versa), and using the technique I think of as ‘scrying’ – finding suggestive patterns or shapes in the card backgrounds – gives results no less relevant than the various medieval magicians, merchants and apprentices met in RWS and its variants. A few key cards are given the potential for quite sophisticated and original meanings: the Chariot for example, according to the LWB, may stand for “the means used for circulating ideas, non-decorative etchings”- in other words, communication. Most of the LWB meanings are clear and useful, with the exception of the note about XV the Demon, which I can’t quite make sense of – “to wear a mask which reveals who we are”.