Tarot of the Orishas 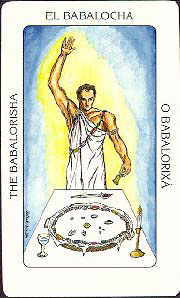 The Tarot of the Orishas is a bilingual Spanish/English Tarot deck that has 25 Major Arcana cards, and uses the four suits but without court cards. Element and Message cards have been added instead.


Card Images from the Tarot of the Orishas 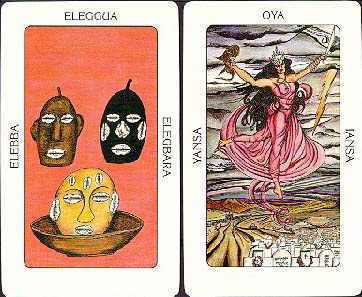 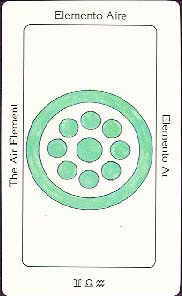 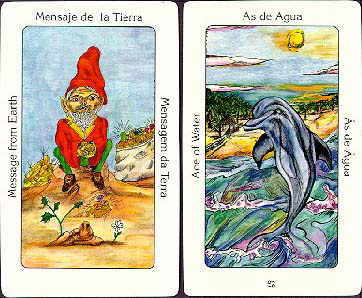 Tarot of the Orishas Review by Bonnie Cehovet

I absolutely love this deck - the energy level is tremendous, the graphics have a soft, fairy tale quality to them. (Lovely pastel coloring.) The deal is - despite its name - this is not a Tarot deck! It is a wonderful oracle - just not a Tarot deck. :)

There are 25 cards that roughly correspond to the Major Arcana (see below) and 52 cards assigned to the four elements - 13 cards to each element. The 25 Major cards are unnumbered, and represent Orishas (Orixas/Orichas), which roughly translate to saints, supernatural beings or superhuman beings. They are the pure energy of the Divine - i.e. Yemaya is the Orixa of saltwater, of the sea, and would represent that force in nature.

The cards are 3 1/8" by 5 1/4" - a nice size, but a slight problem for those of us with small hands. The cardstock is good quality glossy - something that I definitely appreciate. The backs are purple, with a silver circle in the center, surrounded by gold stars. Understated and very nice looking. The 25 Major cards have the titles on the border in English, Spanish and Portuguese. The cards for the Elemental suits have the same borders, with the addition of astrological symbols at the bottom of the cards. Each Elemental suit contains cards for Ace's through Ten's, an Element card and a Message card. Each Element also has a card with a mythological figure: Air has Fairies and Sylphs, Water is Undines and Mermaids, Fire is Salamanders and Earth is Dwarfs and Gnomes.

One of the stated purposes for this deck was to share the mysteries and myths of Africa. From the book:

"For those who are interested in paranormal phenomenology, for folklorists, psychologists, philosophers and anthropologists, for students and researchers on Afro-American cultures, this book will be of real interest." pg 2 LWB

There are several interesting sections in this book - one of which is a chart comparing the Orishas and Roman Catholic Saints. Another wonderful section is the presentation of spreads - including the Celtic Cross, a very imaginative five layer spread called the Paxoro layout, a chakra layout (I am always on the lookout for ways to combine chakra work and the Tarot), and the Gizeh Pyramids layout.

I personally recommend this deck to anyone who wants to expand their horizons and work on their spiritual growth. I made the mistake of only getting the deck - there is a book that goes with this deck that goes in depth into the cards, which would allow the cards to be understood on a deeper level. The deck/book set is the best bet here.

Tarot Of The Orishas, even though it is technically not a Tarot deck, certainly resonates with me!


Complete Details of Tarot of the Orishas


Similar Decks to Tarot of the Orishas

Home > Decks > Tarot of the Orishas