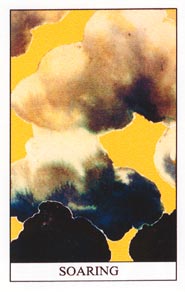 The Third Eye Oracle has 48 cards with fairly simple designs, arranged in 12 themes of growth, change and perception. Each theme contains a four card cycle illustrating its aspects, which are also visually associated with the colours of the four elements. The deck is self-published by the artist. 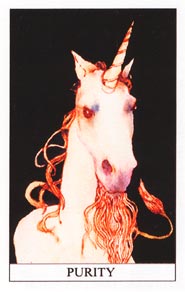 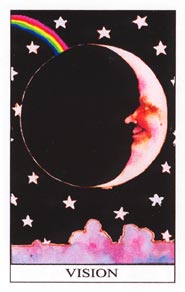 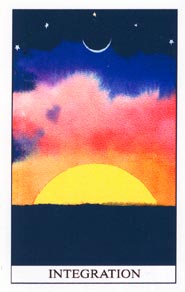 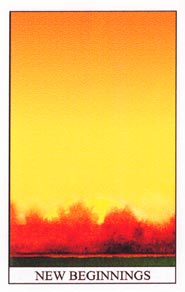 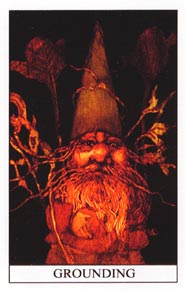 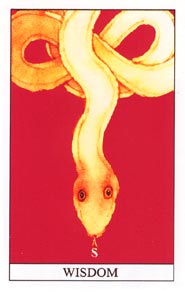 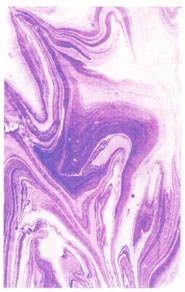 Gary Lund’s Third Eye Oracle is a uniquely structured oracle deck, intended for "opening to your inner vision within the cycles of growth and change". Lund calls it a ‘hind-sight’ oracle, as his cards were painted in an initial two month flurry and then over the next twenty years, he played with the cards allowing their meaning to reveal themselves. In his words:

"These cards originally came to me as a kind of card game, an intuitive entertainment, a celebration of our connection to the cycles of growth and change upon the earth. Cards that would activate and bring forward our own inner-knowing, our intuitive seeing of our world. The images and sequences came so quickly and easily, as though they had already existed and had only to be brought through me onto the paper."

There are 48 cards, arranged into twelve themes of growth, change and perception, each containing a four card cycle. The cycle of each theme is associated visually and conceptually with the four elements - air/mind/yellow, fire/spirit/red-violet, water/emotion/blue and earth/physical/black - and the cards illustrate different aspects of the theme. Lund’s artwork is relatively simple but strong, featuring a background block of colour matching the card’s element and a contrasting foreground element.


The Third Eye Oracle is a self-published and self-produced deck, its cards and stapled booklet packaged in a handmade box of thick cardboard. The cards are 2.75 by 4.25 inches in size, and have been printed with an inkjet printer - as has the box – giving them a slightly dotted pixilated appearance and a need for more careful handling. The faces of the cards are glossy, while the backs are uncoated paper with a marbled effect (and though not strictly a mirrored design, it is irregular enough to be ambiguous).

The 40-page stapled companion booklet introduces and explains the deck and its development. It displays a small image for each, plus the card title, its associated keywords, and spiritual advice. For example:

Revelation, crescent.
What was hidden, the truth of the matter, is now revealed by the light.
R: Illusion; a partial glimpse of the surface of a whole form, a fragment, is accepted as being the complete reality.

Wisdom, south; self-knowledge.
Serpent tempts you with wisdom beyond your judgement of what is good or bad. Release your prejudices that block the fire energy within you.
R: Self-deception; believing that wisdom comes from knowing all the answers.

The Third Eye Oracle may be used any way the reader fancies or finds useful at the time -- for single card contemplation, for traditional tarot spreads, for yes/no questions, or in the artist’s own five card spread. The cards aren’t conventionally attractive, but together they are a compelling and original oracle for intuitive development and spiritual guidance.

"May these little cards point you toward your own inner knowing."