The Ukiyoe Tarot adapts Marseille symbolism into a Japanese style deck, with traditionally dressed figures on the Major Arcana, and undecorated minor arcana. It was out of print, but is back in print from US Games.


Card Images from the Ukiyoe Tarot 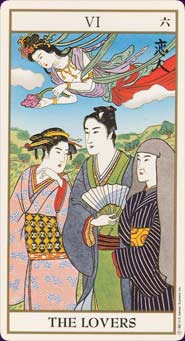 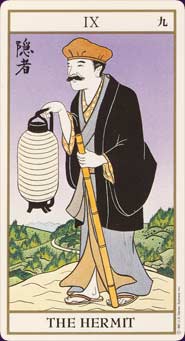 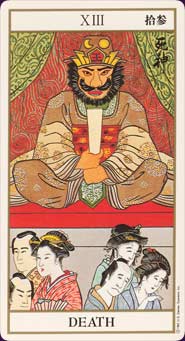 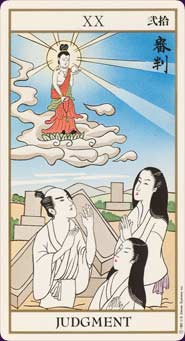 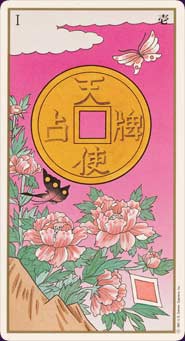 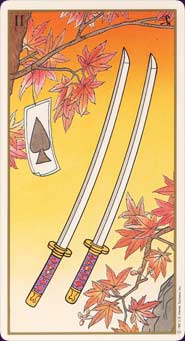 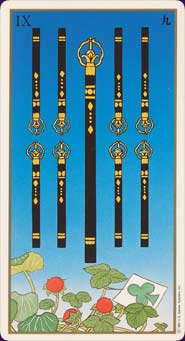 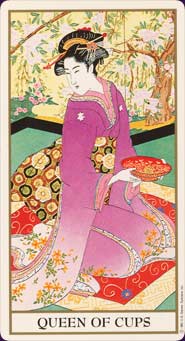 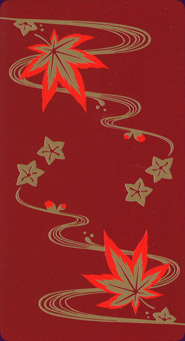 Note: Although it is usually written Ukiyo-e, I will use Ukiyoe as Kaplan does for consistency.

In 1980 Stuart Kaplan commissioned Japanese artist Koji Furuta to design a Tarot deck in the Ukiyoe style. The resulting Ukiyoe Tarot was one of the more beautiful but underrated decks published by U.S. Games. The Ukiyoe Tarot was a lucky find for me. Although I do like Ukiyoe art, I wasn’t actively seeking this deck and only purchased it because the price was so low. It has since become on of my favorite decks.

Ukiyo (“the floating world”) became a popular subject for Japanese writers and artists during the Edo period (1603-1867), a time when the shogunate kept the country all but cut off from the rest of the world. Consequently, the art from this period is uniquely Japanese. Although most sources translate Ukiyoe as “pictures of the floating world”, I believe Kaplan’s translation of “this wretched world” is also appropriate. The Ukiyo genre reflects the Buddhist ideas of the transience and impermanence of the physical world we live in, but whether that is wretched or just floating is, I suppose, all in your perspective.

Many Ukiyoe paintings and woodblock prints depict people in everyday life. Actors, courtesans, and other famous figures were popular subjects. The Major Arcana and court cards of the Ukiyoe Tarot reflect this popularity. The Magician is explained as the sideshow act in a Kabuki theater troupe. The Sun depicts two children pretending to be sumo wrestlers. This is not to say that the majors in the Ukiyoe Tarot are more mundane than in other decks. On the contrary, Kaplan and Furuta go to great lengths to incorporate the Japanese Buddhism of the period and pre-Buddhist mythology. Although the Majors keep their traditional European titles (written in both English and Japanese), the archetypes are represented by Japanese figures. This might cause some slight confusion in a few cards as not all characters translate perfectly. For instance, Death, represented by the God of the Underworld Emma-hoo, has many qualities that could easily be attributed to Judgement and lacks much of the “transformation” or “transition” we see in other decks.

Later in the Edo period stricter laws forced artists to move away from people as subjects, and landscapes became more popular. I was slightly disappointed with the Minor Arcana at first glance. I had hoped to find scenic pips, but I now realize my mistake. The Minors are more detailed than I first thought, and I will argue that they are scenic. The suit signs take up most of the card, but various plants, birds, streams, and the occasional bug surround them. It might seem that these additions are only aesthetic, but going to the LWB one finds that each piece of the picture is symbolic. The five of cups is described as “A single crane flies over a lush marsh. One corner of the scene is barren, denoting an incompleteness or imperfection in the landscape”. The divinatory meanings that follow are almost redundant after the symbolism is explained. The suit signs are wands, cups, swords, and pentacles, but Furuta has modeled them on the Japanese implements that were in use at the time.

The cards measure 4 ľ” by 2 ľ” on sturdy and flexible cardstock. The backs are reversible and are themselves very pretty. As far as little white books go, this one is surprisingly good. It serves as an excellent primer to Ukiyoe art and the Edo period. Each symbol is well explained, and Major Arcana and court card come with a story or lesson on the culture of the period.

You can’t please all of the Tarot readers all of the time, but I think this deck could come very close. Readers of all skill levels and most backgrounds will find this deck useful. Although this deck has a very specific theme, it is not a niche deck. At the time of this review, the Ukiyoe Tarot is unfortunately out of print. I pray that Mr. Kaplan will come to his senses and put this deck back into circulation before I wear out my copy. In the meantime, if you can find a reasonably priced Ukiyoe Tarot don’t pass it up. What on the surface appears to be just another pretty deck turns out to be very detailed and complex.