The Universal Tarot draws on many diverse cultures and mythologies such as Christianity, the Egyptians, Islam, Shamanism, Buddhism and more, to show cultural diversity.


Card Images from the Universal Tarot 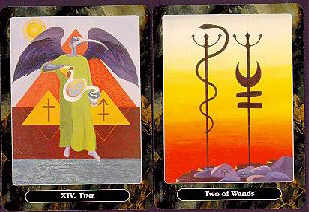 Maxwell Miller carries with him a world of experience - as a performance artist, musician, artist and world traveler. One of the aims in the creation of this deck was to show cultural diversity, and to act as a reflection of the times that it was birthed in. Miller sees this deck as a means by which the Seeker may view differing religions and belief systems in relation to each other.

The traditional pantheon of 16 court cards (King, Queen, Knight, Page) have become a pantheon of 12 (King, Queen, Knave). Miller's reasoning is twofold: (1) in order to assign astrological correspondences to the court cards, there need to be 12, and not 16 cards, and (2) this fits in with his numerological view of the Tarot, in which the numbers 3 and 7 are keys. (Three court cards instead of four within each suit.)

I personally have a small problem with the above. It would take some of the traditional energy from the deck in terms of accessing information, and it could be a problem for those readers that work with significators (although a significator could simply be drawn from another deck). It also smacks of trying to fit one system over another - and not really doing justice to either.

The cards themselves are easy to handle and visually quite appealing. They are 3 1/4" by 4 1/2", on good quality, glossy card stock. The backs of the deck have a beautiful greenish/grey marbled appearance, with astrological symbols in gold on a white background, framed in gold in the center of the card. The face of each card is bordered with the same marbled effect on the backs of the cards, with a thin white border framing the illustration itself. The title for each card appears at the bottom of the card - white text on a black background within a thin white frame.

The coloring for this deck is done very well, the artwork somewhat stylized. For me, some of the representations did not convey the traditional energy of the card. A good example of this would be the Three Of Cups - generally quite an energetic, "happy" card in most decks. Here we see three cups superimposed over a downward triangle (indicating the physical nature of this card). The metaphysics are here, but it lacks a bit of "heart". The cards are heavy on astrological and alchemical symbology - which is one of the main reasons that I purchased this deck, but it is also something that could stand in the way of using this deck for general readings (i.e. with clients).

The accompanying book gives the Seeker a good understanding of the deck and how to interpret it. Included in the back of the book are tables for each of the card groups (Major Arcana, Pips and Court Cards) relating the card to its astrological representation. There is also a short index of subjects, which most books of this type do not have, and which I find to have great value.

One of the cards that really attracted me, although it is far from traditional in representation, was the Six of Wands. From the book:

"Six is one of the most balanced and harmonious numbers. It is also the number of accomplishment. In the suit of fiery wands the six suggests victory or success, but only after strife and hardship. It is an auspicious omen, a harbinger of good news, and heralds a time of celebration and positive hope.

These wands, arranged in three groups of two, are actually the Lamaic "crossed dorje', symbol of equilibrium, immutability and almighty power. So the overall message is tremendous, but now well balanced, energy. This is a fair description also of the astrological reference in this card, of Jupiter in Leo. Jupiter takes that fiery power and turns it into warm relationships coupled with success.

The dorje is the scepter of the Tibetan Lamas. Used in most Lamaic rituals, and signifying mastery of life in the material world, it is also known as the thunderbolt of Indra - Indra being, more or less, the equivalent Indian deity of Jupiter.

In this case, the unleashing of the thunderbolt has passed and its fire now burns steadily in the two flames, the twin lamps of Jupiter in Leo, which cast their warm glow over the whole situation, creating a stabilization of energy.

In the center of the crossed wands are the Tibetan swastikas which symbolize spiritual victory. The two triangles behind each swastika indicate balanced polarities. The Key to this card is achievement."

Final thoughts about this deck - it is a good deck to work with to gain an understanding of astrological and alchemical symbols, and lends itself well to more spiritually oriented readings.

A bonus is the nine appendix cards that are included with the deck. Miller has taken the keywords for each card and placed them on deck sized cards for easy reference. If one understands that this is a somewhat non-traditional Tarot deck, it can be a wonderful tool to work with.