The White Rabbit Oracle is a 59-card oracle deck of playful and whimsical art collaged from vintage imagery. The playful white rabbit of the title (who is modelled on Alice's rabbit and pops up throughout) invites you on a journey into your own Wonderland –- a journey of self-discovery, inner adventure, and wonder. 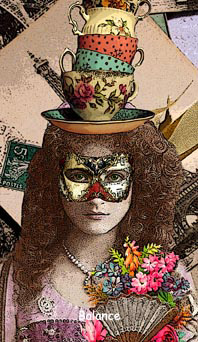 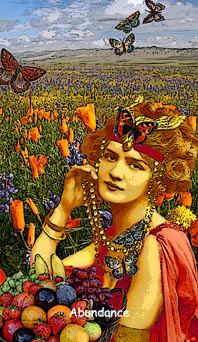 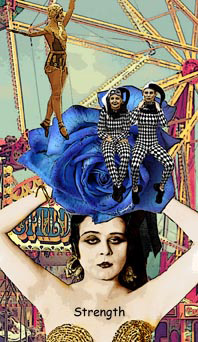 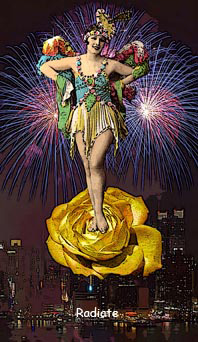 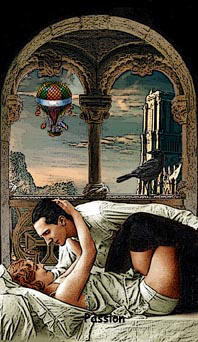 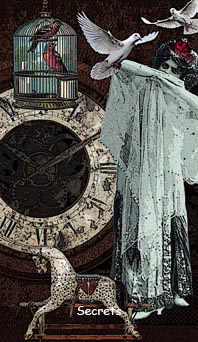 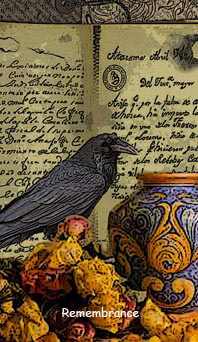 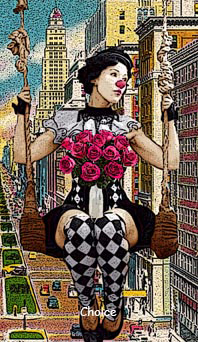 The White Rabbit Oracle is a 60 card deck created and self-published by tarot consultant and artist, Arianna Siegel. The altered-art features a compelling blend of fantasy and vintage imagery and a white rabbit who serves as a guide on this magical tour of the human psyche.

The 2.75” X 4.75” card are borderless with a low sheen and printed on sturdy card stock that makes for ease of shuffling. The card backs are black with floral accents of cream and pink highlighted by antique gold lace. A dark palette is contrasted with vivid splashes of color on the majority of the face cards and a stipulated finish that emphasizes the vintage theme that runs throughout. A black-and-white LWB is included with purchase and comes packaged with the deck in an organza bag. An additional color PDF version of the LWB is available for free download from the artist’s site.

A key word or brief descriptive printed at the bottom offers clues to the possible meanings each card may hold for those seeking guidance. The theme of the graphics and key word(s) vary from calls-to-action to states-of-being and encourages the querent to engage with the full spectrum of evocative imagery from the exuberant Celebrate—a seaside ballerina dancing with a parasol on the hood of a pink Cadillac—to the haunted shadow self hiding in a dusty corner of the Secrets card where time has slowed to a standstill.

I have played with the deck for several months and find it easily accessible and particularly suitable for free association with short daily readings. The themes reflected in the cards run the gamut from the serious to the contemplative to the sublime. Here are three examples:

Change - a naked, androgynous figure reclines on a settee next to a skeleton showered with decaying rose petals. The figure holds one knee as its neck rests in the crook of the armrest, it’s face hidden in shadow despite the light from the chandelier above. A floor-length curtain has been drawn tight behind the settee and a tuxedo cat stands at the base of it, staring out at the querent: the only spark of animation in an otherwise languid scene. Is the feline the guardian of this vignette? Or a harbinger of pragmatic and much-needed change?

Revelation - a solitary female sits in the grass by a roadside shrine, the folds of her gown draped in silky abandon around her. Her only company is the lavender-and-white wildflowers cascading from the archway overhead and a crow watching expectantly from the entrance of the shrine. A set of keys lie on the stones in front of her, just out of reach, but she is blindfolded and cannot see them. Will she remain tucked away in her reverie? Or lift the blindfold, pick up the keys, and acknowledge the crow and whatever message it is waiting to share with her?

Invitation - a beaming debutante poses under a rose arbor with a human-sized white rabbit in pinstripe pants and suspenders. This is an adult, blissed-out Alice resting her chin on her escort’s shoulder as hot air balloons rise in the starlit sky behind the couple. But, in the background, a moonstruck and possibly inebriated Humpty Dumpty sits on the garden wall grinning broadly. Does his presence indicate a need for restraint? Or offer further inducement to party until dawn in Wonderland?

I found the White Rabbit Oracle immensely fun to work with and think its fresh and unstructured approach will hold broad appeal to tarot/oracle enthusiasts and collectors. It is an ideal divinatory system where a direct answer to a simple question is the goal and equally useful as a sophisticated tool for expanded self-awareness. And a pleasure to look at. In short, a great deck for novices or aficionados alike!

The White Rabbit Oracle is a deck that is both magical and full of wisdom (There are even cards called Magic and Wisdom!!). With 60 cards in the deck, it covers every emotion and situation, you could possibly think of. The cards are full of surprises (And guess what, there’s a Surprise card too!) with the way Arianna has put images together on each card. I love the way the white rabbit shows up on cards from time to time, in a new and different way each time.

I am in love with every card in this deck and there are a few cards that I am especially drawn to. I love the ballerina dressed in pink with her pink parasol doing an arabesque on a pink Cadillac on the Celebrate card. I love the Secrets card with a scene of what looks like secret objects hidden in an attic. For Explore, there’s a clown like figure on the moon surrounded by magical hot air balloons. And a woman with her flowing dress being blown by the wind in what looks like an old church is looking at colorful butterflies dancing across the ceiling - Renewal. The imagination in this deck is truly incredible.

Besides using these cards for readings, they also lend themselves to story telling. One of the things I plan to do is draw 6 cards or so and then write a story/fairy tale that incorporates the images in the cards. These cards are a doorway to opening up the most creative parts of ourselves.

Each card has one or two words at the bottom to indicate the meaning and there is a 3-page document that comes with the deck that gives you more in-depth information about the meaning of each card. I have been drawing a card from this deck each day since I got it and the images on every card have been amazingly meaningful for me.

The cards are well made on good card stock, a nice size, and very easy to shuffle. The collage work is impeccable. The design of the back of the cards is beautiful.

I highly recommend this deck. I own many decks (both oracle and Tarot) and this is one of the most beautiful decks I have ever seen. Working with it is like being in a wonderful dream that you want to go on forever and ever. And, yes, there is a Dream card in this deck too!