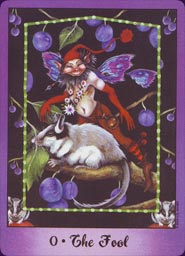 The Faerie Tarot is a hugely colourful, whimsical and positive deck of 78 fae cards. There's a vague resemblance to Rider-Waite in some cards, but most cards take their own symbolic direction. Each individual card also has a differently designed border in the colours of the card. Suitable for older children and teenagers, and the young at heart.


Card Images from the Faerie Tarot 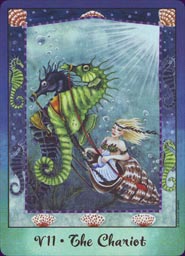 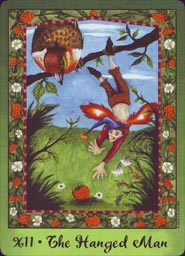 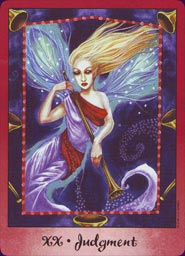 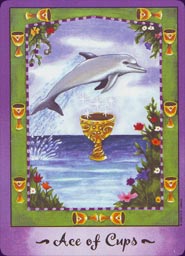 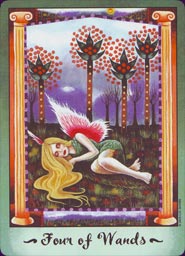 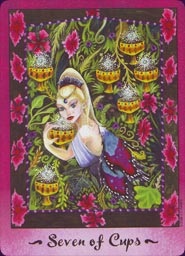 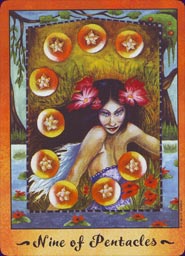 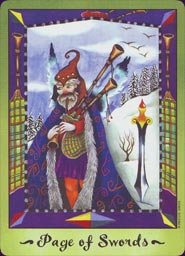 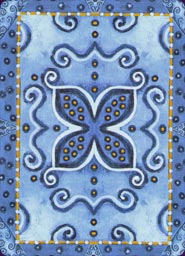 “Drawing inspiration from the four seasons, Faerie Tarot pays homage to the flora and fauna of nature.”

The Faerie Tarot is a bright, vibrant, and light-hearted tarot deck. It’s alive with wizards, fairies, pixies, seahorses towing undersea chariots, gnomes, animals, winged creatures of the air, and nature sprites of the woodland. It draws on nature and the seasons, with the Swords scenes set in winter landscapes, and the Tower as a toppling red spotted mushroom. Nathalie Hertz, French artist and creator of the Vampire Tarot and the Fantastical Tarot, has made of her third tarot deck a wild and whimsical mix of nature and fantasy.

There’s no disturbing imagery or nudity in the Faerie Tarot: the Devil is probably the most frightening card of a not-very-scary bunch, with his purple skin, red eyes and hair, pointed ears, clawed nails and tongue poking out. There’s none of the traditional Christian or tarot symbolism that might be disturbing to a younger audience, even Death is simply a veiled figure, no skeletons or scythes.

The cards have individual borders; the outer border in different plain colours and subtle blends, and a busy inner border that draws on elements and colours from the card scene. In a reading of more than two cards, there is a lot to look at!

The Faerie Tarot has a general Rider-Waite basis in suit and court card names, but takes imaginative leaps in symbolism and meaning. It’s best taken on its own merits and interpreted from your own intuitive feeling of the cards, as some cards are a little hard to understand if you’re used to more standard Waite-based decks. Some expressions or feelings of the cards don’t quite match up; the Four of Wands has a sleeping blonde fairy, the Knight of Swords is plodding along on a white draught horse, one of the women in the Three of Cups looks rather downcast than celebratory.

There’s some strange contradictions in the 48-page booklet too, which could possibly by explained by the fact that it was translated from Nathalie’s original French. The upright and reversed interpretations offered have simple lists of keywords and short phrases; and those don’t always match with what you’d expect. The Ace of Swords talks of the ability to conclude a project, and ‘reached goals’ – a little strange for the beginnings generally associated with the first card of the suit. The Six of Wands, usually a card of victory, talks of stagnation and delayed projects, then rewards through work and good news – and that’s all in the upright meanings, not the reversed. (The Seven of Wands is the named card of victory instead.)

The cards are squarer than a typical deck, at 8cm by 11cm, but with the now-familiar high gloss lamination as is common with recent decks from the publishers. The78 tarot cards and the title card come in an inner flip-top box with the booklet, which is then set inside a larger shelf box that also holds the fold-out spread layout sheet. The winged, gnomish figure on the title card doesn’t appear in the deck as a major character, but is one of the three gnomes in the Six of Wands.

More whimsical than the Whimsical, more colourful than the Inner Child Cards, the Faerie Tarot is a suitable deck for older children, teenagers or very skittish clients - or someone wanting a bright, fun and nature-based deck bursting with colour for their own intuitive readings.

This 78-card deck includes a paper spreadsheet and 48-page little white book. Opening the package of this deck was a visual delight. I felt I was instantly greeted by bright, vibrant colors and whimsical images. This deck definitely offers a fresh, new look at the Tarot.

The deck size is a bit shorter and wider than a standard decks, measuring 3.5” x 4.75”, The card stock is a bit stiff, with glossy lamination. It has wide borders with each being unique, from flowers, shooting stars, hearts, dragons, to many, many more. The card backs are reversible and are done in soft shades of blue and gold. Strength is numbered 8 and Justice is numbered 11.

The deck is also packaged with a 17” x 20” Celtic Cross Spreadsheet. The little white book contains 3, 4 and 5 card spreads.

Nathalie has a unique style of dramatic, medieval and heroic fantasy art. She uses gouche, acrylic and ink. The Faerie Tarot is her third deck. Nathalie lives in Lille, France with her husband, two daughters, and a menagerie of animals.

Nathalie prefers to use the majors only, in the upright position, for her personal readings. She suggests that if you want precise details, to add the minors in as follows: for professional questions add only the Wands, for emotional matters add only the Cups, for material issues add only the Pentacles, and for daily concerns such as health, studies, or activities add only the Swords.

This deck contains no nudity and would make a great deck for the young or young at heart. It would also be a fine choice for those looking for something a little more non-traditional.