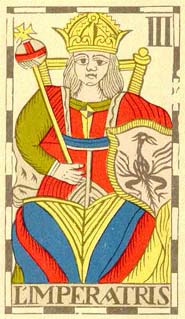 The Tarot Flamand de 1780 is an authentic reproduction of a Flemish Tarot, originally in woodcuts. It's from eighteenth-century Belgium and differs somewhat in imagery from French or Italian Tarots. 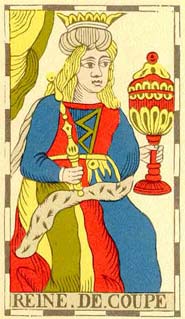 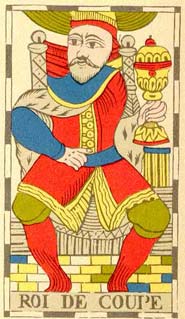 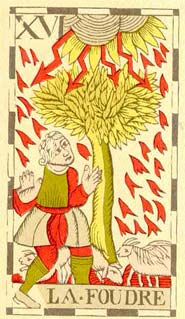 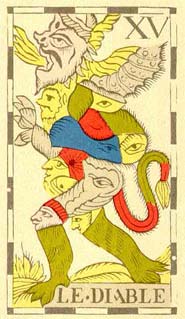 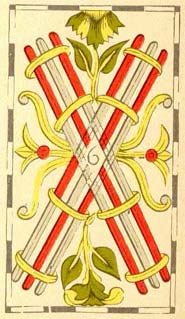 If you’'ve ever visited the Museum of Witchcraft and Magic in Boscastle, Cornwall, UK, then you wi’ll have seen the exhibit called “Joan’'s Cottage,” – a tableau depicting a reconstruction of a nineteenth century witch’s home. The figure of Old Joan, named after the historical Joan Wytte, sits at her table surrounded by the paraphernalia of her Craft: dolls, bottles of potions, her crystal ball and, laid out for a reading, the deck of cards I'’m about to describe. Of course, Joan Wytte herself died in 1813 and would almost certainly never even have heard of this or any other tarot deck, but why spoil a good story?

I’'m aware that several editions of this tarot exist, but the one I own bears the title of the Vandenborre Bacchus Tarot, and was originally published in 1983 by Carta Mundi. It i’s very much a historical reproduction deck. It'’s printed on unusually thick card stock of an aged parchment shade, uncoated on the fronts of the cards (which are fairly large) and only lightly coated on the backs, with unrounded corners. These physical properties make the deck rather hard to shuffle, which suggests to me that it was primarily aimed at collectors rather than people who might want to read it or play games with it. The card designs are dated to 1780, and differ only in details from those of the Jean Galler Tarot of ten years before, even down to the frequent misspellings among the card titles; the Juggler, for instance, is named “Le Bateleux” rather than “Le Bateleur”, which suggests that the craftsman who carved the woodblocks was either illiterate or spoke Flemish rather than French! (His misspelling “Temperence” is an improvement on the “Atrempance” of the Jean Galler deck, though; I'’ll grant him that.)

Many of the designs of the Majors were obviously drawn from the Jacques Viéville Tarot of around 1650. As examples, the picture of the Hanged Man is drawn inverted, leaving him in a balletic, pointy-toed “hovering” pose; the Devil, with eyes and faces all over his multi-coloured body, is shown in profile and walking to the left, and without the usual two imps accompanying him; the Tower is renamed the Lightning, and shows a man cowering under a tree during a thunderstorm rather than a tower; and the Sun shows a boy on horseback, carrying a banner – the image, of course, later revived by Pamela Coleman Smith for the A. E. Waite deck. Unlike in the Jacques Viéville Tarot, however, which had a slightly different sequence, the Major cards appear in the traditional (i.e. Marseilles) order. The Minors are of the style familiar from the Marseilles and Italian tarots, with straight, crossed Batons, curved, interlaced Swords, chunky yellow Cups and rosette patterns on the Deniers, which are the size of plates in the four court cards.

Of course the most distinctive feature of the Belgian deck, which tends either to fascinate people or to put them off, is that neither the Papess nor the Pope feature among the Majors. Instead we have Fracasse, the Spanish Captain as the second Major (actually misspelled “Eracasse” on the card) and Bacchus (“Bacus”) as the fifth. Captain Fracasse is a cowardly braggart character from the Commedia dell’ Arte, shown wearing the traditional doublet, hose and ruff – and also incorporated into his picture is a very rude visual pun which I'’ll leave you to discover for yourself! Bacchus, meanwhile, sits astride a cask of wine, swigging from a bottle, naked except for a kilt and crown of vines. The inclusion of these two cards, I feel, changes the whole emphasis of the deck, moving it away from spirituality and religion and more towards reflecting the life of the common man of the time, with these two images suggesting rowdy taverns and lowbrow entertainment.

As I noted above, the efforts of the publishers to reproduce faithfully the appearance of the historical deck have resulted in the creation of one which isn’'t as easy to shuffle as most people are used to now, which is a shame, given that the system of interpretation offered in the Little White Book is unlike any other I’'ve seen and deserves close study. Trust me; this is not a deck to pick up and blithely read using your usual card meanings, and that'’s not just because of the presence of Bacchus and the Captain. The writer (who is unnamed, at least in my edition of the deck) has taken inspiration from the earliest known listing of the Majors – the anti-gambling sermon “Sermones de Ludo cum Aliis” of 1500. In this document, a rather different sequence is given for the Majors, which the unnamed writer now treats as an “original” order with esoteric significance. Following from this, the sequence runs:

The meanings given for the cards are frequently unexpected. For instance, the Juggler refers to an abrupt, unexpected change, possibly a disaster; Love (not “the Lovers”) means “Love is present to protect you”; and the Star means that “nothing achieved so far is final”, or as the last card of the reading, “the result of this consultation is unclear or undecided.” The meanings of the Minors follow; the suits relate, more or less, to the categories of topics that we'’re all used to, but the meanings tend toward the concrete “fortune telling” kind, rather than the more philosophical and abstract meanings that are current now. As an example, the Two of Swords: “Two swords represent a duel, but this card does not presage bad luck. You will be protected against your enemies, known and unknown. Hostility will not persist; danger disappears.”

The Little White Book finishes by suggesting three ways of reading the cards: the Majors-only five-card cross layout recommended by Oswald Wirth, and two methods in which you use only the Majors and the fourteen cards of the suit most relevant to your question. This idea, which as far as I know originated in “Le Tarot des Bohémiens” by Papus, seems to have fallen from favour these days, but never mind – engage with the spirit of these cards and give it a try. This is a deck that wants to be read on its own terms, speaking its own language. I find it fascinating.

This is a rare deck, long out of print, and I was very lucky to find it when I did. If you’re a fan of historical tarots and you enjoy the challenge of trying something new and unusual, however, then certainly, grab it when you see it. I can recommend it heartily, and perhaps Old Joan would too.