A tarot in the style of 13th century Italian painter Giotto di Bondone, which seems unusually still and posed to my modern eye. But the Giotto Tarot is a workable deck, once you are familiar with its system.


Card Images from the Giotto Tarot 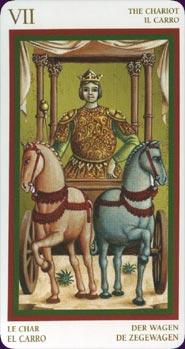 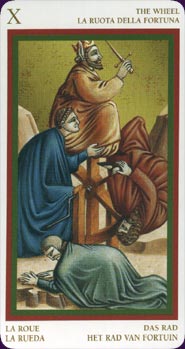 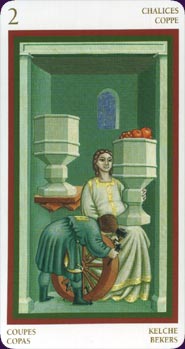 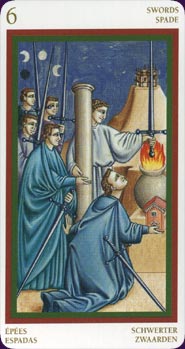 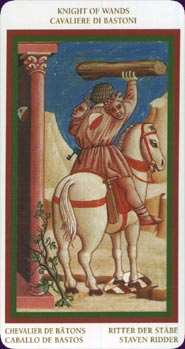 Painted by Guido Zibordi Marchesi in the style of Giotto di Bendone, a 13th century Italian artist, Lo Scarabeo's Giotto Tarot is a hybrid blend of medieval art and contemporary perspective. The deck is the result of Zibordi's in-depth study of medieval iconography and artistic symbology in keeping with Giotto's style, but has a modern three-dimensional view and perspective that painted images of his time did not possess.

The symbolic language of the cards is clear and definite. Each object depicted has a distinct meaning (as explained in the little white book). The cards have very still look - even active cards like the Chariot, the Five of Wands or the Knight of Swords seem posed, motionless, carved in stone or painted on a medieval frieze. Some cards have a sky backdrop to the human scene, other have an tarnished, old-gold background, others, like the Cups suit, are enclosed in a three sided, pale-green room.

The deck is a 78-card tarot with 22 majors and four suits of minor arcana. The suits are Chalices, Swords, Wands and Pentacles with court cards of Knave, Knight, Queen, and King. Justice is VIII, Strength XI. The major arcana cards are a 'translation' of modern esoteric meanings, but the minors are not related to traditional meanings at all. Both positive and negative meanings are given in the LWB for the majors, but the minors have only one pole of meaning as they represent the 'limited and pragmatic' forces as opposed to the majors 'broader and more abstract' sources.

The little white booklet interprets the majors thus: 'X. The Wheel - Alternation - P: positive opportunities, ascent, chronological and natural cycles. N: delay, instability, revolution.' The symbology of the minor arcana cards is explained in a more unconventional way, with direct explanations of symbols scattered throughout the text. For example, the Three of Chalices: 'Carelessness (fool at night with a sheep) threatens (fig. at left who tramples on a compass) a positive undertaking (luck at center).' Or the Six of Swords: 'Only steadfastness (fig. with column and hand armed over fire) will allow you to finish your projects (model of church). Capriciousness must be stayed away from (figures between moons).

By far the most striking thing about the Giotto Tarot is the near-relentless negativity of the deck. Of the Swords suit, there are one or two neutral cards, the rest have negative connotations. About half of the Wands and Cups cards are neutral or positive and a few more of the Pentacles, but the deck is, unusually, more than fifty per cent cards of unpleasant feelings or experiences. Perhaps it is in keeping with the difficult life of the average person of Giotto's era, but the sheer number of disagreeable cards is hard to believe. If you are one who hates airy-fairy decks with an overly positive view, then you may feel the grim realism of this one more true to life.