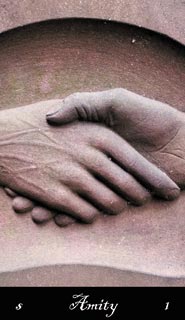 The Graven Images Oracle is a 'system of prediction' deck of 71 cards, depicting cemetery imagery and interesting photographs of gravestones and monuments. The images in the cards have not been altered or enhanced, but reflect the symbols and statuary as they appear in their natural condition, and are used for prediction and meditation based on their own symbolic merit. Now available. 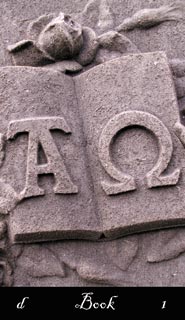 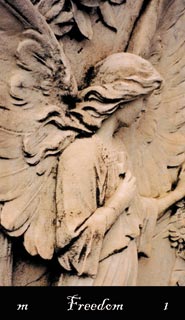 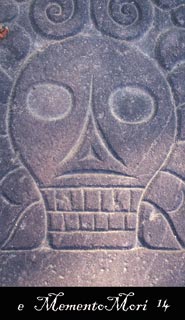 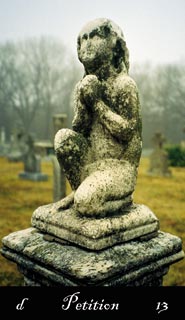 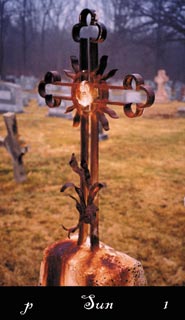 ‘Tomb images carry weighty traditional and personal symbolism, and lend themselves as independent tools and divination. Indeed, the images bring us closer to that portal from which we have become estranged, but cannot avoid.’

The Graven Images Oracle is a stand-alone oracular system. Unlike a tarot deck, it has a different structure of 71 instead of 78 cards, and instead of the usual tarot archetypes, it works with the weighty and sombre symbolism and real imagery of the cemetery gravestones and memorials and persons unknown.

Natalie Zaman searched the graveyards of North American to photograph just the right headstones, statues and tombstones to illustrate the symbolism she wanted to show for her cards. Graveside ornaments and headstones use a consistent symbolism of their own, etched or formed in stone: angels, wreaths, lilies, weeping willows, crosses, hand clasped or pointing, torches, columns, obelisks, urns and much more. The cards are clear and atmospheric; sometimes gloomy or bleak, but other times calm or tranquil, eerie, and unexpectedly beautiful.

There are 71 cards in the Oracle set. Seventy of the cards are divided into five ‘suits;, each associated with the five points of the Pentagram: Divine, Physical, Mental, Social and Emotional. Each set of fourteen cards is numbered, and has seven cards linked with positive, light meanings and seven cards for baser, shadow aspects. The higher the number, the greater the achievement (for the positive cards) or the greater the disruption (for the negative cards).

Card zero, the Wall, stands outside the main system. The Wall card is a special card, with no counterpart in a tarot deck. It’s an indication to stop the reading, as an unknown factor is making the information in the reading unreliable. The book instructs to gather up the cards and then try again after cleansing the cards and re-shuffling.

The combination of the Pentagram spread and the ‘points’ associations of the cards adds a second layer of meaning to a reading – beyond that of the individual cards. The ‘Point Cards in Other Positions’ chapter explains what the secondary energy’ might be: such as what it means if a card with a Divine Positive meaning appears on the point of the Pentagram associated with the world of the Mental.

The cards have a non-reversible image on the back - a willow tree etched into granite – as there are no reversals with this deck. The cards are designed to be used upright and the environment, angle, light and shadows in the card all work together to convey the meaning.

Included with the cards and the black velvet bag is a 110-page companion book, written by author Katharine Clark. It’s nicely made with white pages and bound edges (with one downside in that it doesn’t quite fit in the bag provided with the deck). The book introduces the concept of the deck from both Natalie’s and Kat’s points of view, then gives some instruction on the proper serious handling and cleansing of the cards. It illustrates the Pentagram spread, and the associations with each point of the pentagram.

The card meanings and interpretations section of the book lists the number and letter combination (shorthand for the point the card is linked with, and its placement in the suit) and its title. Kat describes the symbol that is the focus of the card, and gives its interpretation and divinatory suggestion. Finally, the book has some simple spread layouts and sample readings to give an idea of how to read with the cards.

The Graven Images Oracle is a truly unique deck for divination, with a developed and unusual theme blended with skilled photography. It could have been morbid or dark, dealing as it does with the symbols and reminders of death, but instead it has a stillness and quiet peace to its cards.

The “Graven Images Oracle” crossed my path when a friend asked my opinion of it. Not having seen it (or heard of it!), I went to the site to take a look. I was enthralled, and placed an order right away! It is a 71 card oracle deck, based on untouched photographs that reflect the natural state of the images and statuary taken in various cemeteries. It is noted that the cards are meant to be used for meditation and prediction based on their own symbolic merit. If you come from the background that I do, where care of family graves is important, and cemeteries are places of peace and meditation, rather than scary places riddled with ghosts, you will enjoy this deck, and, more important, you will appreciate it.

The set … cards and companion book … come in an environmentally friendly package. There is no box, but the cards themselves are shrink wrapped, with a black velvet pouch included for storage. The 126 page companion book is every bit as well done as the cards. On the cover, we see a photo of “The Wall”, the card numbered “0” (zero) in this deck. A card accompanies the set, giving t he name of the person whose grave the photograph was taken from, and the poem that is included on the stone. It is highly unique, in that it appears in a reading whenever the reading needs to be stopped and begun all over again … whether due to lack of focus, a confused/poorly worded question, or outside forces (such as the client not being ready to hear the answer). Note: The example given for “outside forces” is my own, not that of the authors.

The companion book begins with separate introductions by Clark and Zaman. In her introduction Zaman notes that, for her, cemeteries are record keepers … that the memorials speak of the lives of the individuals interred there. It is so much more than a written record … or even a symbolic one. I take note of the generations represented, and the manner in which the graves are being taken care of … on a routine basis, and on days of importance for surviving family members. What we see here are universal messages.

In her introduction, Clark speaks of what is real, what is reality … and that the photographs chosen by Zaman are her reality, her vision. Clark’s “mission” was to blend her words, her interpretations of the symbols, into a coherent text. She also notes that the language used here is “non-esoteric”, making it easily understood by all people. Myself, I vote for esoteric every time, but I realize that many people do not. The interpretation loses nothing by taking a more mundane, “real” base.

I was quite impressed by the section on handling the cards. Emphasis is placed on handling them in a conscious manner, with respect, and working with the person being read for so that the reading is all that it can be. Cleansing of the cards is also covered. Note is made that the deck contains symbolism and imagery that constitute both light and shadow … that all degrees of life are represented here.

The primary spread … the Pentagram Layout … is a six card spread. Also included, at the back of the book, are a three card Past/Present/Future Layout (with a note that if any card is unclear, to draw one more clarifying card from the deck), two five card Pentagram Layouts, and a ten card Circle Layout.

Each card is presented with text only, in two sections: on sections speaks of the symbolism of the card, while the other section speaks of interpretation.

The cards themselves are 2 3/4” by 4 3/4”, of good quality, glossy card stock. The backs show a photo of a cemetery stone engraved with a willow tree. They are not reversible. The face of the cards has a 1/4” black border. The card title is centered on the bottom of the card, in white lettering. For “The Wall”, the number zero is placed in both the right and left hand corners. The rest of the cards carry the first letter of the suit in the left hand corner, and the card number in the right hand corner. The suits are as follows:

Some of my favorite cards from the deck are “The Wall” …depicting six gravestones with the wall of a brick building in the background; “Empty”, a plaster statue of the Madonna; “Blessing”, showing two hands under a wreath; “Sphere”, an orb that is noted as a common marker in the northeast; “Willow”, the scene from the back of the cards; “Sun”, an iron Bontonee cross with a bundle of leaves at its feet, three trefoil arms and a solar disc; “Ivy”, showing ivy growing up and over a cross; “Karma”, a spirit effigy with spiral symbols surrounding its head; “Star”, showing the Shield of David; and “Temple”, showing an open air shrine with four pillars and a roof cap.

The photography, interpretations, and layouts are all top quality … done with great skill and ability, but also with great heart. I was pleased to see the comments of noted individuals on the back of the companion book: Raymond Buckland, Tom Cowan, Amy Zerner and Monty Farber, and Rosemary Ellen Guiley.

This is an oracle that can be used by anyone, and is very good at grounding and centering the work being done/the reading being done.