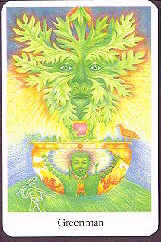 The Greenwood Tarot deck uses pre-Celtic British religious symbols, such as images of animals, landmarks and Gods such as the Green Man, for divination purposes. This deck is long of out of print but is still popular among collectors.


Card Images from the Greenwood Tarot 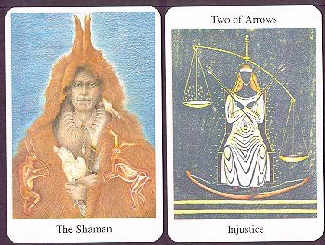 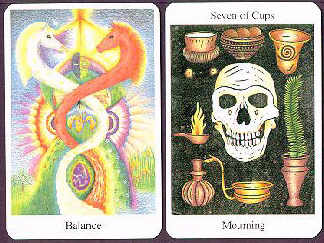 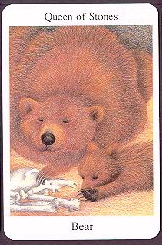 First published in 1996 by Thorsons The Greenwood Tarot is a deck and book set that is a collaborative effort from the artist Chesca Potter and the actor/writer Mark Ryan. As a deck it announces itself as '...a journey of exploration into the symbolism and legend of the mythic forest.' As a system it draws upon the history, archaeology and mythology of Europe to align the cards of the tarot with the Wheel of the Year, the changing of the seasons as they pass through the solstice and the equinox points and through the four Celtic fire festivals of Imbolc, Beltane, Lammas and Samhain.

It was not long after its first publication that The Greenwood Tarot went out of print, due one might assume to lack of original interest in the deck. However since then it has attained such unprecedented levels of interest that it is hard to contemplate it now without thoughts of its value, its supposed rarity and its apparent depths of spirituality. Indeed this deck has become something of a 'holy grail' for both for tarot collectors for whom it commands extremely high prices on the second hand market and for those immersed in a pagan or shamanistic spiritual path. Despite this it is, in the end, a tarot deck, much like many others and ought to be reviewed in that light, ignoring the glamour and the cachet that has accumulated around this deck over the intervening years.

Structurally The Greenwood is a 78 card deck divided into 22 Trumps and four suits, each of which has ten small cards and four court cards. All the cards are fully illustrated and the backs are non reversible, featuring a picture of a shaman holding a drum, an image that is repeated both upon the companion book and on the box. A full set should also contain a piece of folded paper that shows a diagram of the Wheel of the Year and the place of the cards upon it. A somewhat truncated version of this illustration can be found in the book.

The Major Arcana are all titled but not numbered, and many of the cards have been retitled to suit the system they are illustrating. A full half of the Majors have been so radically retitled and redrawn that it is all but impossible to know which card they would represent in a normal pack. However the book that accompanies the deck explains both the correspondence with more standard trumps and the meaning and reason behind the renaming. Once it has been explained it becomes a little more obvious that the Emperor and the Empress should become the Greenman and the Greenwoman but others, such as the Chariot becoming The Archer or the Tower and the Hanged man becoming intertwined together to become the Blasted Oak and Reflection, remain somewhat obscure to those familiar with other decks.

In these cards the reader will find numerous generic mythological figures and symbols, there are greenmen and humans wearing the heads and antlers of beasts. There are also many and varied animals such as the bear that stands proud upon the chambered tomb in the Judgement card, the wren upon The Hermit and the dragon upon the Greenwoman. Using these characters, creatures and symbols Potter and Ryan takes the reader on a journey through the changing seasons of Western Europe, with the Fool, standing at the centre of the wheel, as our guide. With him at our side we travel the circle of the wheel, meeting on our way the Ancestor (The Hierophant) who welcomes us into the Greenwood at Imbolc through the gateway of trees; the lovers of Beltane, dressed in green and the Guardian of the other world at Samhain. Until finally we enter the passage grave of Judgement, the death at the mid winter solstice, the end that will enter into the centre of the wheel to bring the new beginning at Imbolc as the year turns again.

The minor cards are divided into four suits, names Wands, Arrows (swords), Cups and Stones (pentacles). The ten cards for each suit are not only numbered and named but have also been given a keyword at the bottom of the card to aid understanding. Each card is fully illustrated but in a slightly different, more abstract style to the extreme realism of the Majors and the Courts. Again these cards rely on the same sort of characterisation and symbology as the Majors. Labyrinths, standing stones, animals and beast headed figures are all present as the cards, running from the ace forward, move around the Wheel of the Year stopping at the eight stations before descending into the centre for the nine and the ten. The suits are also applied to the system in a different manner, in this way the year is divided into quarters each beginning and ending on one of the Celtic fire festivals, each quarter given over to the governance of one of the suits. In this way the quarter of the year that begins at Imbolc and ends at Beltane is given to the suit of Wands; from Beltane to Lammas belongs to Arrows; Lammas to Samhain is the suit of Cups and lastly the period of time from Samhain back to Imbolc belongs to the Stones.

A glance at the images used upon these cards reveals very quickly that although many changes have been made and all are overlaid by the characters and the symbols used so freely in this deck, the minors are, in fact, based squarely upon the Rider Waite images that have become such a prevalent standard in the English speaking tarot world. Whereas the majors have undergone a full re-imagining to bring them in line with the system the minors have had a more cosmetic make over and their origins can still clearly be seen. Particularly obvious is the heart pierced with three arrows and the figure lost in ennui on the four of cups. The meanings of the minors has likewise been altered, though still showing their origins in the RWS system. although in practice this often means that the negative cards in the Waite deck have here been given a more positive aspect. The 10 of Wands is here given the meaning of responsibility, the wands that the figure carries becomes a challenge and a test rather than an oppressive burden to be endured.

The artwork of the court cards returns to the beautiful realism to be found upon the majors and here Potter and Ryan have imagined each member of the court as a different animal, placing them in position upon the wheel of the year according to the cyclical rhythms of their lives. In this way the Queen of Wands, a hare, often associated with Spring, is placed just after the Spring equinox. Likewise the King of Cups, the Reindeer, is placed in the autumn, the time of year when those mighty beasts battle for the dominance of the herd. In this way the courts too are linked in to the system of the Wheel of the Year, making the whole deck into a homogeneous system that plays by its own rules and has a certain internal coherence.

Artistically this deck is, without a doubt, beautiful and Chesca Potter is indeed an accomplished artist, and clearly the set has been created with a deep and abiding love of the British countryside and Britain's mythical past. However the symbolism that she uses seems both lazily typical and amorphous. Amongst other recurring images are those of the chalk hill figures of England, the Uffington White Horse, the Long Man of Wilmington and the wonderfully phallic Cerne Abbas Giant. Also featured are standing stones, dolmen, chambered tombs, labyrinths, cave art and medieval church carvings. In all the symbolism covers a period of time that stretches from the palaeolithic to the middle ages and this deck appears to lump this entire span of time together, with the assumption that all beliefs, all symbolism, all spirituality was consistent throughout these many centuries. Clearly this is not so. Indeed it cannot be so, and to assume that nothing changed in 20 000 years, that both the world that people lived in and the way they perceived and interacted with it was unchanging, mythic and eternal is to do both the past and the individuals that lived then a disservice. Furthermore the use of such obvious symbols like the trilithons of Stonehenge and the chalk hill figures suggests that these have been used more for their resonance with popular new age culture rather than their true historical significance.

The book that accompanies the deck is a somewhat divided creature. The sections dealing with the majors are both long and filled with detail, those dealing with the courts and the minors are unconscionably brief. Little more than key phrases for the purposes of interpretation it is as though they were added as an after thought. There are however substantial sections of the book that deal with the theory behind the system and also with the practical applications of the cards, readings, meditations and counselling, sections that would be of great use to those who wish to delve deeper into the cards of The Greenwood Tarot.

Ultimately this is a deck that will appeal to some and not to others. Because of its reliance upon new names and new images for familiar cards, because it works through an unfamiliar system it would be a difficult deck for someone to pick up and use casually, even someone conversant with the cards of a standard tarot deck. Indeed, this is a deck that many would find difficult, exclusive even, as it relies so much upon the seasonal changes prevalent in western Europe and upon a wheel of the year that would make no sense to someone living in a different climate. Nevertheless it is and has been a fascinating addition to the tarot tradition for those that are able to find a copy.