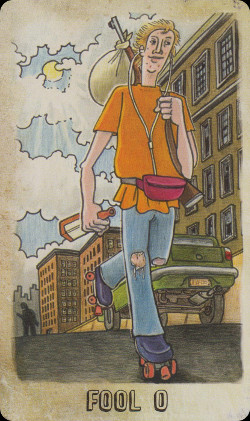 Omegaland is a 78 card deck set in a dystopian, apocalyptic modern universe of the same name. The illustrations are survivalist and heavy on the rifles, crossbows, and tins of beans. It's both a tarot deck and card game, and instructions for both are included with the deck.


Card Images from the Omegaland 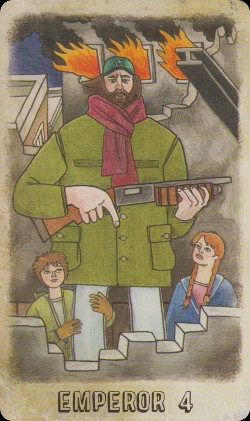 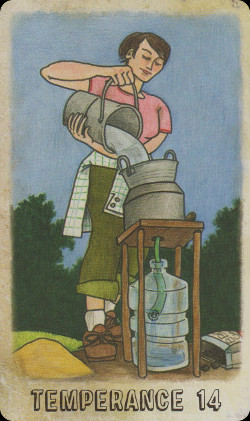 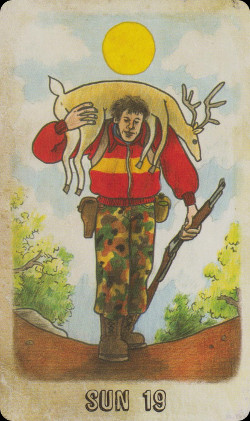 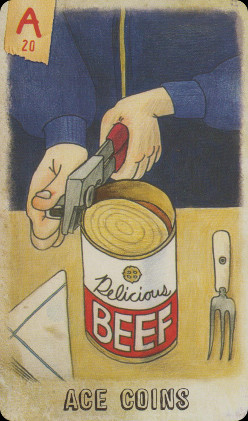 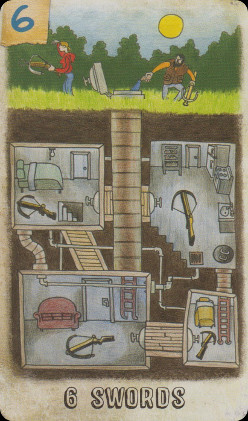 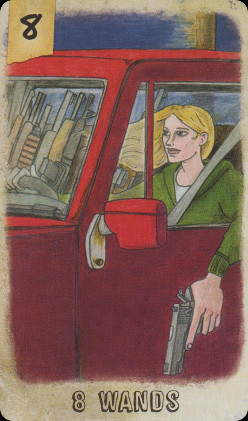 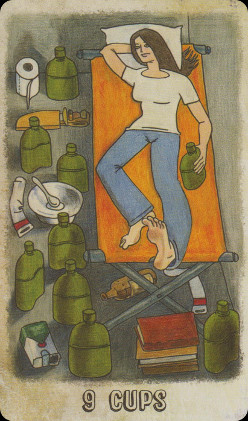 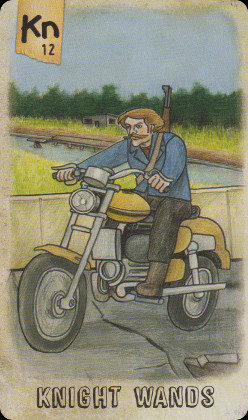 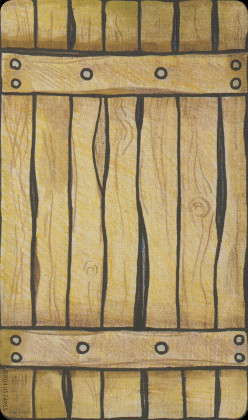 The Omegaland tarot is an anomalous deck by U. S. Games Systems, Inc. Influenced by the current trend in post-apocalyptic texts, survivalist reality shows, and an epidemic of zombie series such as The Walking Dead, Z Nation, and iZombie, as well as militia culture this unusual deck is set in a lawless society where violence is the rule. It is hard to tell if this deck is a bit tongue-in-cheek or is totally serious, and being marketed to a heretofore untapped demographic – the redneck. Given that this is also a card game that you can play on those cold nights in the bunker complex it may not be entirely humourless.

So in your a few spare minutes when you aren't out scavenging, looting, or reloading your guns, you grab a bunch of pencils and card 'liberated' from an abandoned school and draw yourself a deck of tarot cards. Your art style is a little rough-hewn, a bit chainsaw art, but your nouvelle redneck compatriots will love your depiction of their crumbling world – Harleys and handguns – this is how you roll.

This is a 78 card tarot – with 22 Major Arcana and 56 Minor Arcana. In the Major Arcana no Trumps have been renamed, and there are no significant departures from the Rider Waite Smith standard. In the Minor Arcana, Coins have been recast as cans of food, Cups are now water canteens both big and small, Swords have become crossbows, and Wands are now guns – Glocks, pump-action shotguns, Kalashnikovs, M-16's, shotguns, even good ol’ fashioned revolvers.

The court cards remain standard – Kings, Queens, Knights, Pages. All cards have both numbers and titles beneath the illustration, in addition the Minor Arcana have a letter and/or number (for the card game) written on a scrap of masking tape in the top left-hand corner.

The cards measure 72 x 120 mm. The card stock is fairly high quality, solid and inflexible, with a smooth low sheen finish. The deck sits nicely in the hands and shuffles smoothly. The print is crisp and clean, sharp lines, clear colours, no blurring or bleeding of the images. The palette is somewhat military in nature – lots of browns, khaki, olive drab, grey, with occasional splashes of red, orange, pale blue, and grass green. The artists style is blocky and choppy – a studied amateurishness. The borders for the cards are not clearly defined, rather each image peters out into a stucco coloured edge. The print on the back – a drawing of wooden planks – is in fact asymmetrical, but not so obvious that it would be distracting if one were to use reversed cards. The packaging is a stiff-cardboard box, with a smooth satiny finish. It is printed with images from the Omegaland Tarot, and information about the deck.

The Little White Book is 52 pages long, with instructions in English only. Using faux-typewriter print, information is given in the first person by your guide through Omegaland. This is an anonymous, masculine voice, full of gruff smarts and survivalist wisdom, that tells it like it is. The divinatory meanings are quite standard, but refreshingly shorn of all esoteric jargon. Each card has a little bit of narrative that explains what is happening in the image, seamlessly melded with interpretations. This is followed by one, or more, keywords which summarise the essence of the card. This is a really good information, bluntly put, with no ambiguities. There are no interpretations for reversed cards given. There is a 'Survival Spread' included – a 6-card draw with Location, Food, Weapons, Fuel, Drink, and Stockpile to help the Seeker divine their future. Instructions for the games are provided on a further 12 pages of the LWB and 6 additional cards. There are separate rules for 3 players, for 4-6 players, and free-for-all games.

This is a truly unusual tarot deck – one of several more masculine decks to appear on the market lately. While much of its symbolism departs radically from more standard images it is still a functional deck. I would not recommend it for beginners, however if you are an experienced tarot reader with an interest in post-apocalyptic landscapes then this may well be the deck for you.

The inhabitants of Omegaland, a 78-card tarot deck (and game) created by Joe Boginski, live in a post-apocalyptic Pacific Northwest (at least, it looks like the PNW to me). The cartoonish characters who have sometimes exaggerated limbs that add to the drama of the images are placed in harsh situations. There are topic-appropriate references to violence among the card images, although few are really gory.

As a tarot, I find Omegaland to be brilliant in its interpretation of the imagery of the classic Rider Waite Smith. For instance, the Omegaland Seven of Wands shows two armed men in a lookout tower, protecting their encampment. Below them sit five of their "tribe," also armed. Compare this to the standard RWS Seven of Wands, in which a single armed man on high defends his territory! And Temperance? Just as in the RWS illustration, a figure pours water from one container into another. Unlike the RWS version, though, in Omegaland, the figure filters the water as she pours! (Clean water is a big deal when you're a survivalist!)

In Omegaland, Boginski employs a color palette I would call "moody", lots of soft browns and greens punctuated with brighter colors. There's a wonderful consistency to the artwork throughout the deck, excepting the Nine of Swords. That particular card is illustrated by a figure shown at a much different angle and from much closer up than any of the other figures in the deck. (In fact, Omegaland's Nine of Swords reminds me very much of the Dreamer Nine card Nine of Swords in Emily Carding's Tarot of the Sidhe.)

Card titles and suit names are standard, but the imagery is true to the survivalist theme: Wands are represented by rifles and pistols; Cups are canteens or other water containers; Coins are cans of soup(!); and Swords are crossbows.

For tarot readers and collectors, this deck offers lots of good basics: Nice card stock and a smooth satin finish give it a good shuffle. Cards are generously sized at 2.95" x 4.75", they're a bit wider than the norm. The non-reversible backs show an image of a boarded up doorway. Soft-edged borders add to the scenes, rather than detracting, and card titles are written in a great font!

There's also a quirky little illustrated bit of masking tape at the upper left corner of each of the Minors, including the Courts, with a single number, or a letter and a number, that signifies points for the Omegaland game. And about that game. . . . The deck includes six extra game cards, and the LWB dedicates the last dozen pages to instruction about the game. Which I haven't played. Which I probably won't play. But don't let that stop you!

The deck follows the RWS quite closely. But I think Omegaland would suit readers at any level, even those with little RWS experience, as the images illustrate situations that are easy to apply to one's own life. (Well, minus the post-apocalypse, that is.) Readers who are sensitive to images of violence might want to be cautious, however, and consider the many card images available on-line before making a purchase. And there is at least one card that might make animal welfare advocates uncomfortable.

However, although I consider myself fairly sensitive, and I'm hugely pro-animal welfare, I'm really a fan of this deck! I thought I was getting the deck to add to my collection. And in fact, I've found it to be wonderfully readable. Despite the desperate times depicted throughout the cards images, I find the characters very human, and the deck overall surprisingly warm (and somehow reassuring).