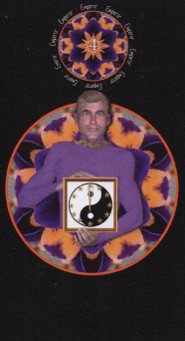 The Sacred Mandala Tarot is a 78-card deck with a foundation on sacred geometry. The cards have vivid, colourful scenes on black backgrounds, set within an individual mandala in the major arcana and below it in the minor arcana. 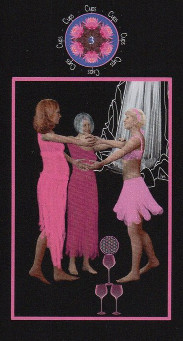 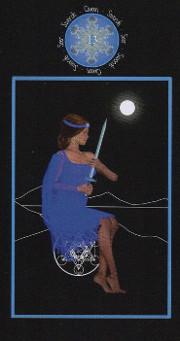 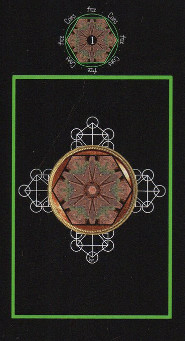 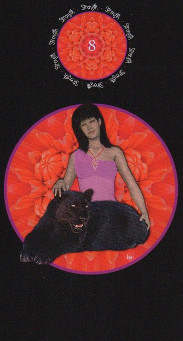 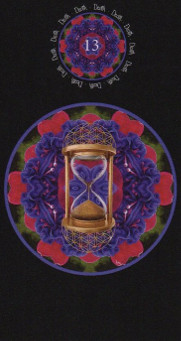 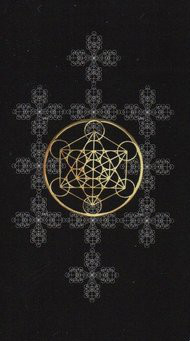 The Sacred Mandala Tarot is a 78 card Tarot deck that is built upon a foundation of sacred geometry. It follows a traditional format, with the Major Arcana using traditional titles, with the following exception: the Hanged Man becomes the Hanging Man. The suits are Wand, Cups, Swords and Coins (Pentacles). The Court cards have been renamed to: Page/Student, Knight/Seeker, Queen/Seer, King/Sage. The deck comes with a beautiful mesh bag to hold the cards.

The deck is accompanied by a 204 page companion book. In her foreword, the renowned Tarotist/artist Carrie Paris makes a strong point about the manner in which Mendel encourages the use of the art of mindfulness into the practice of divination. This is definitely where I find myself lately – standing apart from outcome, while being very aware of what is going on in the present. Or, as Paris words it, how we align ourselves with the present. Paris goes on to talk about how our chosen beliefs affect our reality. I was very happy to note that the tone of the foreword was in keeping with the gentle tone of Mendel’s work. I have met both ladies, and they are what they speak – gentle, creative souls. Paris shares this quote from Carl Jung:

“What did you do as a child that made the hours pass like minutes? Herein lies the key to your earthly pursuits.”

That quote brought me great peace – it was/is an affirmation that I am where I need to be, doing what I need to do.

In her preface, Mendel sets the tone for working with this deck. Whether we believe that the future is pre-ordained (already scripted), or whether we believe that the future us unscripted, and evolves from our thoughts, this is what we are going to draw to us. By taking back our intuitive wisdom as our birthright, we can balance thinking with “non-thinking”, and feeling with “non-feeling”. We are consciously choosing to be in the present, enhancing the ability of this incredible companion book to enter into the realms of time and transformation. From the book:

“Some who receive this deck will choose to continue using it in familiar and traditional ways, others may consider some of the new possibilities offered within the text. As always, the choice is ours and the future we create will be so influenced. May it be bright, deep, rich, creative, and fulfilling.”

Mendel talks about belief, sanctity, intuition and psychic ability, divination, and the mythic Hero’s Journey. She touches on mindfulness, mysticism and manifestation, and the evolution of consciousness. She talks about the present being the key to the future, She describes her approach to reading the Tarot as an expansive and graphic storytelling of the present moment, and its choices that are creating the future. She also talks about mandalas as used in spiritual work, and creating them from shapes and symbols.

The Major Arcana is described as being composed of mythic archetypes, while the Minor Arcana deals with everyday life. The sacred geometric shape associated with the suit of Wand is the Torus and the mandala is composed of flames. The cards in suit of Cups is represented by a mandala of waterlilies and feature the Flower of Life. The cards in the suit of Swords is represented by a mandala of the clouds and sky and include Metatron’s Cube. The cards in the suit of Coins (Pentacles) is represented by a mandala of red rock and include the Tree of Life. Ending the introductory section is one of my favorite writings – The Desiderata. I was surprised to see it there – and very pleased! Each of the 78 cards is presented with a full page black and white image, and the following categories: Card Name and Mantra, Key Words, Magical Mandala, Illustration Details, Mystical Motif, Meaning and Mystery, Mindful Manifestation, and Questions.

The following spreads are presented: The Four Worlds: My Reality, My Beliefs, Yes/No Reading, The Life Reading: My Potential, My Present, At the Crossroads: Making A Choice, Journey to Consciousness: My Soul’s Purpose, Connection and Consciousness: Love and Relationship, and Lighting My Way: From Dream to Reality.

At the end of the book is a bibliography and a listing of Tarot related websites.

The cards are 2 3/4” by 4 ľ”. The card backs are black, with the geometric design of Metatron’s cube in the center, and are reversible. Mendel describes how she created the image: “I used Metatron's Cube as a sacred geometric shape of 13 circles that when joined center to center offers 78 paths - that seemed like a perfect diagram for a 78 card deck. The white lines are outlines of kabbalah's Tree of life.”

The card faces show the mandala for the card suit, with the card number in the center. The image is centered on the card, surrounded by a thin border that carries a specific color for each suit: Wands, Cups, Swords, and Coins.

The Three of Cups shows three female figures, dressed in pink, extending their arms out to each other. The mantra the Three of Cups is: Celebrate the circle that is unbroken. One of the questions to ask is: With whom do you laugh the longest and the loudest?

Death shows the image of an hour glass, with the sand running into the bottom. The mantra for Death is: Without expectation, I yield to change and welcome the new. One of the questions to ask is: What do you believe about death?

Strength shows a dark haired female figure, seated, petting a black panther. The mantra for Strength is: Gentleness is strength, and strength is gentle. One of the questions to ask is: How do you relate to the wild?

The Hierophant shows a female figure with her head balanced on her hands, surrounded by the petals of a water-lily. The mantra for the Hierophant is: From my heart I listen deeply and completely. One of the questions to ask is: What do listening and love have in common?

The Emperor shows a male figure holding a clock, a symbol of Chronos and Kairos. The mantra for the Emperor is: I organize the details of the grand scheme. One of the questions to ask is: Are you able to summon The Sacred Warrior within when needed?

The Ace of Coins shows a six-sided mandala. The mantra for the Ace of Coins is: Manifestation grounds intuitive vision. One of the questions to ask is: Do you value Nature as a teacher?

The Ace of Wands shows a magical wand bridging heaven and earth. The mantra for the Ace of Wands is: I celebrate my ability to fulfill my creative vision. One of the questions to ask is: Do you practice “being” as well as “doing”?

I am very impressed with both deck and book. The black background draws me in (as representing a void), and the simplicity of the mandalas and the “clean”, vivid images go a long way to being able to work with this deck. I appreciate the foundation in sacred geometry, and feel that this deck lends itself to readings, personal work, journeying, meditation, and more. The deck is limited only by the imagination/vision of the user. I recommend it as an investment in one’s self.