Tarot of the Secret Forest 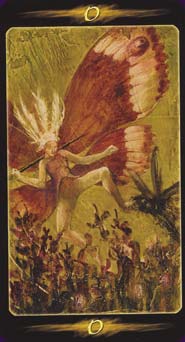 The Tarot of the Secret Forest is a unique deck with fantasy forest scenes on both sides of the cards. The faces of the cards have the scene in colour, while the back shows it in black and white.


Card Images from the Tarot of the Secret Forest 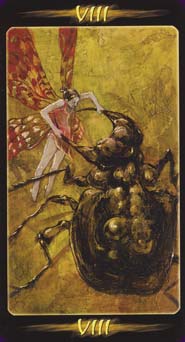 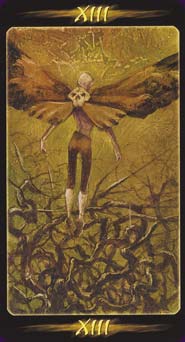 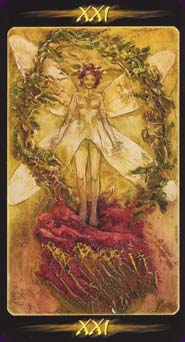 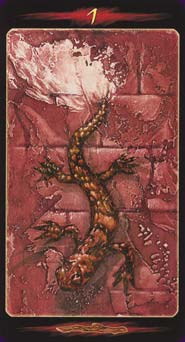 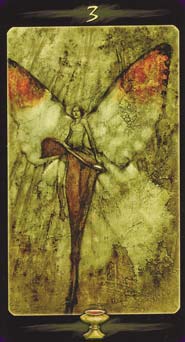 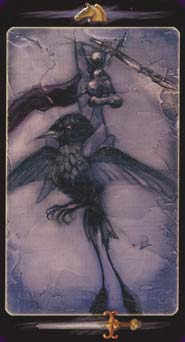 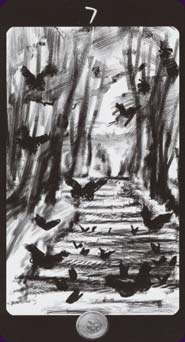 Tarot of the Secret Forest Review by Solandia

"Explore this corner of mysterious nature, far from the chaos and frenzy of our everyday lives, where brambles and brush entwine, where wild fragrant flowers bloom on rich grassy carpets, where the rays of the sun filter through the foliage of trees, where silence is music."

The Tarot of the Secret Forest is a dreamy, green forest of insects, bugs, and faeries at the bottom of the garden. Artist, Lucia Mattioli, lives on the edge of a forest, uncultivated and with extravagant vegetation. The brambles and greenery brought her familiarity with the insects and life around her house, inspiring her to perceive "single images, forms that can change with every breath of wind and animal".

Her deck has a unique difference, unlike any other Tarot deck I’ve seen -- it has images on both sides. The front of the cards have Lucia’s textured painted art in muted and monochromatic colours, appearing sometimes like an old frieze painted on plaster, depicting images and beings from long ago. The colours are muted and use a limited palette with lots of greens and blues, as though seen through a forest pool or through thick undergrowth; reminiscent of lurking on a damp forest floor.

On the ‘back’, the card duplicates the same image as on the face, but in a stark black and white sketch instead. I found the black and white cards focused attention on the details of the imagery rather than the colours, and it was easier to see the vital symbolism rather than the entire blended scene. Both sides can be used together in the same combined reading, where the cards are mixed to represent the emotions and intellect, or conscious and unconscious. (You may also have to alter your shuffling and drawing technique to use these cards – as they have the image on both sides, you’ll need to have your eyes shut or the cards in a bag. I found pulling cards quickly without quite looking at the stack to be effective.)

The Tarot of the Secret Forest has the standard 78 cards, including court cards of Knave, Knight, Queen, King and suits are Chalices, Pentacles, Wands and Swords. Both sides of the cards have black borders and feature only numbers or suit symbols. Unusually for a deck from Lo Scarabeo, there are no cards titles in five or six languages that can distract from the Tarot imagery.

The cards are intended to be emotive, and I connected the most with Strength, a girl faery gripped by – and gripping – the jaws of a much larger beetle; The World, a smiling double-winged faery standing in a living bower, and the Seven of Pentacles, like a sunlit stairway dappled with butterflies on a warm and hazy summer afternoon. I found the scenes to be interesting, emotive and intuitive, but often difficult to make out in a Tarot sense with resorting to the minimal keywords to shed some light on the intended meaning.

The companion booklet is printed in five languages and has limited space for companion information in English. The provided meanings are suggestions only and give a name, traditional meaning, and combined “meaning of the emotivity-rationality differential for each card” -- or an emotional meaning and then an intellectual meaning. For example:


The Tarot of the Secret Forest is a non-standard deck in concept, imagery and interpretation, that shows its best side to one who is familiar with Tarot and has the patience to engage with these images. It can be used traditionally, or it can add another dimension to what would otherwise be an ordinary Tarot reading.


Complete Details of Tarot of the Secret Forest


Similar Decks to Tarot of the Secret Forest