A sweet and cute tarot of flowers, set in a wooded fairy-tale world. Every card in the Spirit of Flowers Tarot has a realistically drawn flower and a tiny, childlike fairy associated with it.


Card Images from the Spirit of Flowers Tarot 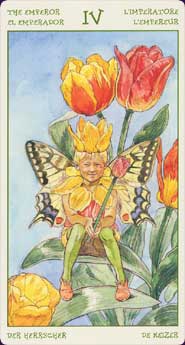 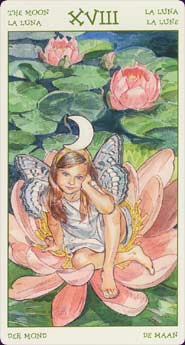 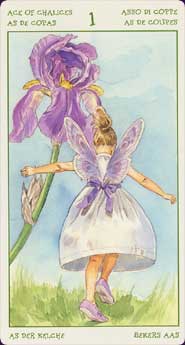 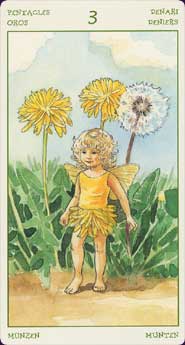 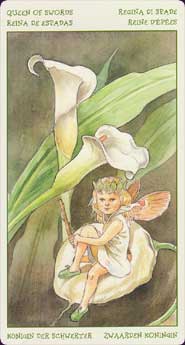 A tarot of flowers and fairies set in a wooded fairy-tale world. Each card in the Spirit of Flowers Tarot has a floral association and meaning based on the 'secret language of flowers, their symbolism, legends, and origins'.

The concept for this 78 card tarot deck was created by Laura Tuan, who has been responsible for numerous other tarots - Tarot Egyptiens, Tarot des Gitans, Le Tarots Mayas - all published by De Vecchi. The art is by Antonella Castelli, and has a similar pastel and line-drawn feel to the Tarot Art Nouveau, her other creation. It's full of realistically drawn flowers, and cutesy fairies who are alternately mischievous, happy, inquisitive, sullen, serene, and wistful. Animals also occasionally feature - hamsters, frogs, insects, snails, and two hairy white creatures in the Chariot card, which I eventually identified (with some help) as hedgehogs.

The Chalices are represented by blue flowers - Lilac (Knight of Chalices), Lavender (Nine of Chalices), and Petunia (Four of Chalices). Pentacles are shown by golden flowers - Buttercup, St John's Wort, Dandelion stand for the Queen, Five and Three. Wands are pink and red, with Hibiscus for the King, Oleander for the Six, and Agave for the Ace. The Swords have white flowers, like Yarrow (Nine), Azalea (Four) and Magnolia (Ace).

Flowers of all colours represent the majors; whatever the artist thought most appropriate for the card archetype… Geranium for the Fool, Jasmine for the Star, Poppy for the Hanged Man, Rose for the World. The major arcana are roughly analogous to standard trumps and include enough familiar symbols to be easily readable.

This is a very sweet tarot; it's not one for face-slapping honesty or confronting imagery. Even the Devil figure is kind of cute… the nymph is only pulling a face at us and there are no chains or flames in sight. The Ten of Swords, normally a violent and even bloody image, shows a sweet-faced blonde girl smiling. The Three of Swords has a curious-looking child, who doesn't look to be in pain or grieving. The Tower is probably the 'scariest' looking card (relatively speaking) in the whole deck: two casually dressed fairies fall headlong from a dead tree. An orchid, the flower association, is below them. (The booklet gives this meaning for the card: XVI - The Tower Orchid. In the language of flowers: end of love. Collapse, excessive ambition, illness, dismissal, deceit, fate, danger, breakdown, warning.)

While the lack of tarot referents in the minors make the Spirit of Flowers difficult to use for the inexperienced, it would be a suitable deck for use with children, querents who are a bit frightened by the idea of tarot cards, or just when you feel the need for a more positive self-reading.

When I first began playing with this deck I was struck by the cute fairy characters in alluring gardens amongst an array of exotic flowers. I considered it to be a deck that would be hard to read as it doesn’t follow traditional Tarot story lines and I perhaps dismissed it as a deck to look at but not use; pretty, sweet and wonderful for a starter deck for children.

However as I was shuffling through the deck looking for the cards to use as promotion I felt a whole new angle towards this deck. I felt myself being drawn into the gardens with the delightful children that are all as individual as the flowers. I realized this deck was trying to reach me in other ways. In fact there is no tradition with this deck, it is talking the language of flowers.

This requires a shift from the intellectual concepts of the structure of reading Tarot to allowing yourself to be drawn in and hear the message as if you are sitting quietly in a seasonal garden complete with the perfumes on the breeze. There is an amazing peace in this deck: a peace that allows the child to express itself as a free spirit.

The art is intricate from two perspectives, firstly that of the fairy children who are all so unique and natural, and secondly the depiction of the flower realm which would require an enormous study of the botanics behind the subject.

In the minor arcana is the most beautiful depiction of swords with all the white flowers I have come across. The yellow flowers are the pentacles, pink flowers the wands and mauve the chalices. The major arcana make us wonder at the flowers chosen to be of the major realm.

This is a deck to absorb as opposed to analyse. It is a garden of knowledge where the flora works its magic on your questions and leaves the querier with a sense of peace, beauty and a smile on their face. Beautiful work by Antonella Castelli.