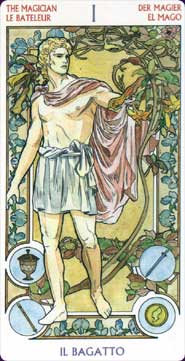 The Italian-published Tarot Art Nouveau is floral, ornate and lavishly decorated. It is a very uniform tarot with a very romantic, dashing style - women all young and beautiful, men mostly bulging muscle. 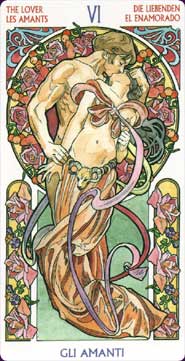 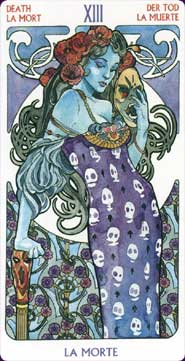 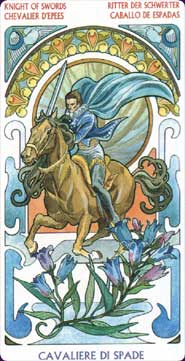 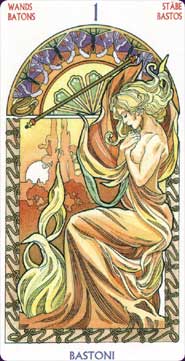 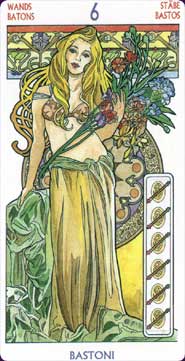 Art Nouveau ('New Art') was a style of architecture and decoration, as well as an art movement, developed in Europe and the USA in the late nineteenth century. The style was characterised by ornate stylised patterns of leaves, flowers and vines. Art Nouveau was not limited to paintings - it was aimed at removing the barriers between 'major' and 'minor' arts, unifying art, and centring it around people, and influenced graphics, architecture, furniture and even jewellery design.

The Tarot Art Nouveau was influenced and inspired by the Art Nouveau movement, and its coloured ink drawings on the cards are elegant, flowery and ornate. Every scene is adorned and decorated with floral wreathes and symmetrical, natural arrangements. People are the focus of the deck and are shown in close-up on almost every card. The colours are soft and spring-like: greens, blues, pale pinks, and yellows, inset into a white border. The main title, in Italian, is purple; other language titles are pink.

It is a wonderfully attractive and pretty deck, if a tiny bit on the bland side. The people, mostly women, in the deck are uniformly young and attractive. The occasional men are muscular and virile, the women pale, bare-breasted, longhaired and languid. Everyone is so gorgeous, and gorgeously drawn, that there is very little contrast between the different cards. The art relies on nuance for understanding and conveys meaning with the expression and position of the human figure and face, rather than with the traditional set of tarot symbols.

The major arcana meanings are close to the usual archetypes, but fewer than usual and are little more than divinatory keywords. ("XVIII - the Moon. This card represents visions, imagination travel, melancholy and attraction for the unknown. XXI - the World. This card represents perfection, full result, achievement of any enterprise and reward.")

However, the minor arcana are not always linked with familiar Rider-Waite style meanings and symbology and the artist's intending meaning is not always apparent. For example, the leaflet packaged with the cards lists the 7 of Pentacles as: 'The scornful look of this maid represents arrogance and unscrupulousness.' The 6 of Wands, normally a card of success or victory is described as: 'Great danger often hide[s] behind false appearance. This card represents a dangerous and unfair opponent.' So although only a few words, they are helpful for providing clues to the card's meaning, at least initially.

This is not the same deck as the Art Nouveau Tarot by Matt Myers. While drawing on the same artistic period for inspiration, the Tarot Art Nouveau by Antonella Castelli has an Italian influence, where the style was known as Liberty, and is less representative of stained glass design.

While not a deep or philosophical tarot deck, the Tarot Art Nouveau is a tarot deck that works well for straightforward fortune telling, and a work of art worthy of addition to any tarot collection.

This deck very closely follows the classic Art Nouveau style with which many of us are familiar, through the commercial art of Alphonse Mucha and others. The images are vivid, but also very florid. The characters portrayed on the cards -- including the minor arcana, which are fully illustrated -- are usually in some sort of pose or state of rest, rather than moving around and interacting with the suit objects or other people. So, the lines are bold, and the art is certainly not overbusy or confusing; however, the cards are frequently not very distinct from one another at first or second glance. Because of the lack of motion in the images, effectively interpreting spreads while you are still getting used to this deck will require paying attention to the characters' facial expressions, the set of their shoulders, etc. The artist uses these minute details to convey the traditional attitudes and emotions that we associate with the inhabitants of the different cards.

The majority of the card images have one person in them, with maybe a third of the cards featuring two people. An unusual aspect of this deck is the predominance of women in it. There are Knights and Knaves, rather than Prince and Princess or Knight and female Page; but the Kings all have women beside them who appear to be consorts, whereas the Queens are alone. Most of the minor arcana cards have only women in them; the majors mainly adhere to the genders usually assigned them, although Death is female and Strength is for some reason male. Many cards feature pairs of women, sometimes posed in a way that suggests, but does not insist upon, intimacy. Some cards that tend to have a male-female couple in them in other decks - Two of Swords, Three of Swords, and Ten of Cups are some examples - have female pairs/couples instead. (The Lovers and Two of Cups are male-female, however.) The femaleness of the deck could merely be because the Art Nouveau style focused so thoroughly on women; regardless of the reason, I found it to be an interesting and fresh change of pace.

The deck comes with a little pamphlet that gives very brief card meanings, many of which seem irrelevant to the usual variety of meanings we assign when we do spreads. If you need a guide to the cards for reading with this deck, use a good general tarot book, or a booklet from another deck that you like.

I would recommend this deck for intermediate to advanced readers who already have a liking for art nouveau styles. If you don't feel any attachment to this kind of graphic art, I don't think these cards will be very evocative for you at all; they will look repetitive and too similar to each other. But if art nouveau is up your alley, it's a gorgeous deck and a pleasure to use.