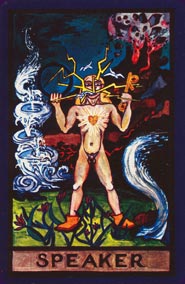 T: The New Tarot is a deck 'for the Aquarian Age', published in 1969 but currently out of print. The major arcana cards have been altered significantly in titling and imagery. The minor arcana have plain pips in suits of Stones, Blades, Serpents nd Pears.


Card Images from the T: The New Tarot 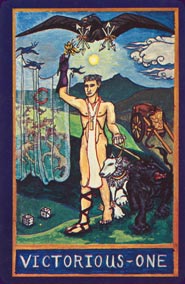 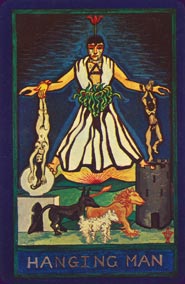 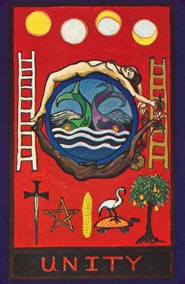 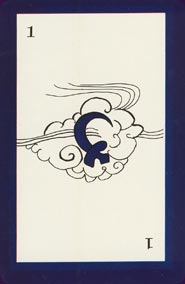 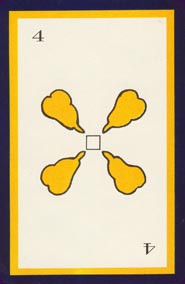 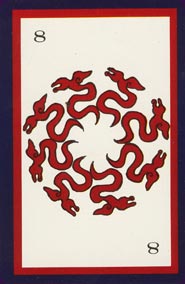 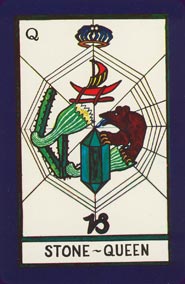 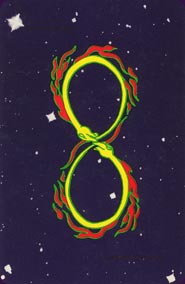 Before Tarot (in the traditional sense) became a part of my life, "T: The New Tarot, Tarot For the Aquarian Age" (John Cooke and Rosalind Sharpe, Western Star Press) showed up. The version that I have would have been from the third printing, in July of 1970. I remember getting it some time in my early to mid-twenties, but I have no clue how or where.

"T: The New Tarot" is a decidedly unique system, and working with it has been interesting, to say the least! I take this deck out from time to time, and have two of the first readings that I did for myself housed with the cards, books, and map.

It might be a good idea here to provide a bit of background on the development of the deck, before I discuss my ongoing experiences with it. "T: The New Tarot" is definitely a product of its times. Rosalind Sharpe was a medium and astrologer, who, along with John Starr Cooke, was amongst a group of people who used the vehicles of the Ouija Board and automatic writing to channel this deck. (I have read that the Ouija Board was recreated on a piece of paper each time this deck was worked on!) This took place in Cooke's home in Carmel, and later in Sausalito, as well as Mexico.

The name of the entity that they were channeling was The One. After each session, Cooke would paint the Major Arcana card that had been channeled.

The boxed set that I have includes the cards; a LWB (Little White Book) labeled "I -Instructions: A Synopsis of the Book of G"; a 60 page book (4 1/2" by 6 3/8") entitled "G - The Royal Maze: Guide to the Game of Destiny", by John Starr Cooke; a 148 page book (4 3/8" by 6 3/8") entitled "T - The New Tarot: The Tarot For The Aquarian Age", by John Starr Cooke and Rosalind Sharpe; and a heavy duty plastic layout for the Royal Maze that is large enough to require a significant amount of flat surface to work with.

The book "I" references the game represented by the Royal Maze, and consists of Game 1 - Contest By Tarot (a competitive game to form a layout for a Tarot reading - note: this requires two people); Game 2 - Self-knowledge Through Tarot (spreading a layout for reading the Tarot's destiny); Game 3 - A Simplified Reading; and Game 4 - A Concentrated Reading of Now; Game 5 - Yantra Meditation by Tarot; Game 6 - Magic With Tarot; and Game 7 - Knower Rummy. There are detailed instructions for all of the games, as well as for reading the layouts. The cards are presented with a short definition, but no scans.

The book of "G" references how to read the New Tarot for the Aquarian Age. The first chapter is prefaced with a scan of the layout (map) of the Royal Maze. Even though he refers to it as a games, Cooke brings a sense of seriousness to his presentation. (Had he not done so, I would have passed on this whole thing!) He speaks of the Royal Maze as a map of our psyche. He does note that information that is italicized in this book was information that was channeled through the Ouija board.

Cooke does a credible job of presenting the how and why of doing readings in a manner that makes sense, and is easy to understand. He refers to the psychological and astrological foundation for the Royal Maze. Things that meant little to me at the time mean more know that I have studied the traditional Tarot. Now I can go back and look at some of his illustrations, such as the one that shows the Major Arcana in a lemnescate formation, overlaid on a circle with the letters "ROTA" marking the four directions.

There is much more information included in the "Book of G", incredible information that opens up the Tarot in many different ways. This is the book that I use to read with this system - it is easy to follow, reasonably in depth, and allows me to learn something new each time.

Now we come to the "Book of T: The New Tarot for the Aquarian Age". This book for me was intimidating, and somewhat scary. I quickly made the decision that I could learn a whole lot without using this book, and still stay within the system! The first thing that this book tells us is that it is presenting a "progressed" version of the Tarot. It also states that because the symbols came through the Ouija board, no man authored or contrived them. This sounds good, until you stop to think that the Ouija board itself can be maneuvered. By the time I got to the part that states that the book was written by The Nameless One, who writes his own destiny, my hair was standing on end! I came to my own personal understanding of the caveat "Take what you will, and leave the rest behind!"

The presentation of the "Book of T" is somewhat in story format, presenting the cards as Being (what they are) and Becoming (what they evolve into). For Instance, the Tower becomes the Citadel, the Hermit becomes the Seeker, and Justice becomes the Donor.

Even though I was put off by the wording of the text, and the constant mention of "The One", I was intrigued by the physical layout of the Royal Maze - one so large that it had to be either placed on a large table, or on the floor. (I spent a lot of time on the floor with this deck!)

I found the cards strange - there is no other way to put it. I would have found them even stranger if I had had a Tarot background before I started working with them! The suits are Blades, Stones, Pears, and Serpents. The Pips do not show scenes, simply multiples of icons for each suit (Marseilles style). The Court Cards show multiple symbols, but no human forms. The Major Arcana are renamed and reordered:

The map of the Royal Maze is fascinating, showing a globe being held up by identical black (on the right hand side) and white (on the left hand side) mythical creatures. One card is placed in the center, and is surrounded by six other cards. Three cards run across the top of the Maze, with two cards on the bottom. Four cards run along the right and left hand sides of the map. I will not attempt to recreate the Royal Maze map here, but I would like to list the position definitions:

In Card: The center card, unnumbered, unlettered. (Chosen from the 22 Major Arcana)

The following cards are drawn from the Major Arcana stack also:

The following cards are drawn from the stack of Numbered cards (Pips):

1-10: These cards represent the spinning of destiny's web across the board.

The following cards are drawn from the stack of Royal Trumps and Knights (traditionally considered the Court Cards):

11-14: These cards represent the people caught in the Spider's web. These four cards are placed on the four symbol stations: Torch, Ship, Spilling Cup and 8.

The cards are then shuffled together, and a final card is drawn.

15. This is the Seeker's means to a "way out", their way of freeing themselves from the web of life that they have woven for themselves.

I decided to do an abbreviated version of the Royal Maze, using the first six positions only. Because all of these cards are Major Arcana, I could use my favorite deck, the "Gaian Tarot", which at this time is a Major's deck only.

I drew the following cards:

"In" card - The High Priestess A. The Unconscious - Justice B. The Body - Awakening (Judgment) C. The Conscious - Lightening (The Tower) D. The Ego - The Canoe (The Chariot) E. The Form - The Hermit

The Hermit Awakening The Canoe

Note: The interpretations below come from Johanna's companion book to the "Gaian Tarot".

The High Priestess represents me as the Seeker, the Spider who is spinning the web. I am currently in a state of listening to my inner voice, and to voices from the past. I listen to my dreams.

Justice sits in the place of my Unconscious. This is the motivation for this reading. In this deck, the Seeker has themselves become the scales of justice. Justice asks me to consider the consequences of each of my actions. It is asking me to lighten my heart - to "let go" of old ways, of old wounds, of old "injustices".

Awakening (Judgment) sits in the place of Body. Our bodies are the physical shell through which life flows. I am being asked to move to a higher level of consciousness, personally and as a member of this planetary family. I am waking up, and need to accept the shift in my consciousness.

Lightening (The Tower) sits in the place of the Conscious. So I realize that my life is about to be blown apart! Sudden change is coming - I have asked for this change for years now, but have stood in fear of it, so I have not manifested it. On a conscious level, I need to be prepared to make this shift, this move, regardless of he consequences.

The Canoe (The Chariot) sits in the place of Ego. Ego defines who I am, and what my intentions are. I can live with Canoe - I am setting out on my quest unencumbered by any baggage. Strength, determination, and will are all that is required here. As I make my way through life, I explore its spiritual depths. my life is one of balance.

The Hermit (one of my birth cards!) sits in the place of Form. Form is defined as why the Seeker is in the Maze, and the effect the reading has on their designed structure (web of life). This reading, as in all good/effective readings, asks me to look within myself. It asks me to make time for "sacred solitude". Observe the changes around me, and allow them to become part of me.

It may be months, or even years, before I come back to this system again. Each time that I do, I learn something. What do you have in your life that functions in this way? Do you have a deck, or perhaps a book, that keeps coming back for more? These are the strands that make up the web of our lives!

Creator: Word of One Tarot by John Cooke