Tarot of the Ages 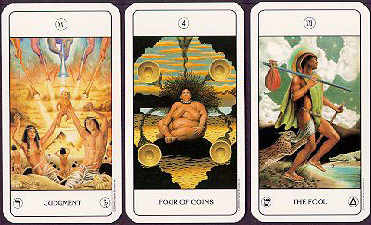 The Tarot of the Ages is a multicultural deck that draws on Egyptian culture for the major arcana, and Aztec, Hindu, African and Viking cultures in the minor arcana. The lifelike card artwork is lovely, but somewhat limited by the substantial white borders.


Card Images from the Tarot of the Ages 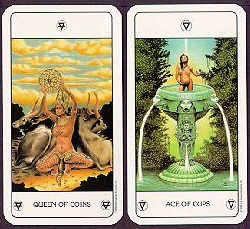 Tarot of the Ages Review by Chris M

The Tarot of the Ages is a deck which was created to celebrate Atlantis the "Mother of Civilization." The artwork is by Mario Garizio and the booklet of instructions is by Patrizia D'Agostino.

The major Arcana cards depict Ancient Egypt, said to be the society which most clearly reflects the Atlantian heritage. The minor Arcana show 4 other societies/civilizations of the ancient world. They are as follows rods, African tribal society; cups, Mayan, Inca and Aztec culture; swords, Vikings; and coins, India. The paintings are very detailed and realistic. The figures on each card seem to live in their own plains of reality. However, there is a great deal of nudity and some of the images in the suit of swords are a bit violent.

As may be expected, given the deck's purpose, the instructions have a mystical slant and the descriptions of each card are written in the form of a meditation rather than a straight description of each painting. One other thing I like about this pack is that it is a smaller sized deck and is easier to shuffle than some of the other decks that I own.

These cards are very well suited to meditation as well as to divination. I have found this deck to be very accurate when I have used it for divination for myself. Anyone interested in Atlantis or in ancient history in general should try it. I really love this deck! It is beautiful, mystical and a pleasure to look at as well as to use.


Complete Details of Tarot of the Ages


Similar Decks to Tarot of the Ages

Home > Decks > Tarot of the Ages