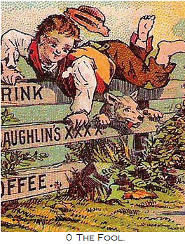 The Victorian Trade Card Tarot is a 79 card deck (the standard 78 plus a Happy Squirrel card) with images created from trade cards of the 1870s to 1890s. This is the third deck from Marcia McCord, available in a limited edition of 100 sets. 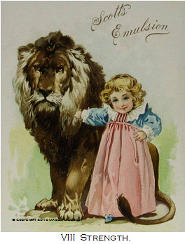 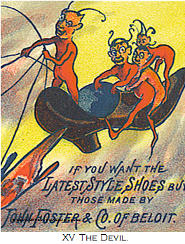 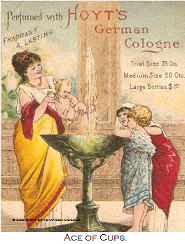 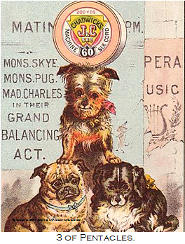 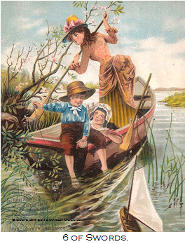 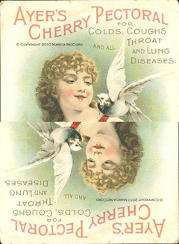 I absolutely adore Independently published decks! I was very lucky to have happened upon a discussion of Marcia’s “Picture Card Tarot” in the Tarot Collector’s forum, and was delighted when I saw that she was going to do two more somewhat similar decks. All three decks are Limited Edition (100 copies), and all are based on the traditional 78 card Tarot structure, with the addition of the most adorable Happy Squirrel. (This little fellow gets around!) Marcia did something with the “Victorian Trade Tarot” that she also did with the “Picture Post Card Tarot” – she allowed individuals to request a Limited Edition number of their choice. I was very lucky in that I did get the number that I asked for!

The images on the Victorian Trade Card Tarot were taken from trade cards that were used as business cards between 1870 and 1890. On the back of her cover card (which shows an older woman reading the cards for what looks like a young couple) Marcia goes into a bit of the history of trade cards. With the advent of improved printing processes in the 1870’s, it became possible to print with bright colors. The cards became very popular, and somewhat of a collector’s item. They went out of vogue entirely by 1900, when advertising moved into the venue of magazines and other periodicals to reach a wider audience.

An interesting fact that Marcia notes is that often the picture on the card had nothing to do with the service being offered (remember, these were business cards!). Colorful and amusing pictures appeared on one side of the card, with the reversed side holding text advertising. Marcia also noted that the front of the card may or may not have included the name, product or symbol of the company doing the advertising! The cards were used to advertise a business or product in general, as opposed to representing a specific contact within a company.

The cards themselves are 2 ˝” by 3 ˝”, with reversible backs. I love the image on the back – the product being advertised is “Ayer’s Cherry Pectoral” (for colds, coughs, throat and lung diseases). The image is the face of an angelic child with golden hair, and a white dove on her shoulder. The fronts of the cards show the image to the edge of the card – no borders. There is a white strip on the bottom of the card, with the card information written on it. For the Major Arcana, it is the card number (in Roman numerals), and the traditional card name. For the Pips (numbered cards), it is the card number and suit, and for the Court cards it is the card title and suit.

The traditional suit names (Wands, Cups, Swords and Pentacles), and Court titles (King, Queen, Knight and Page) are used. There is one additional card – that of the Happy Squirrel. There is no LWB (Little White Book) with this deck.

The cards are filled with color, and quite amusing. The Magician shows a gentleman in a dark suit, standing in front of a table covered with a dark red cloth. He has a white handkerchief in his right hand, and a wand in his left hand. A yellow bird is in the air in front of him, flying away. Do we think that he might has just conjured it?

The Fool shows a young boy, hat flying, going over the top of a fence (with his little dog’s head and front paws showing between the fence boards.

The High Priestess shows the figure of a young female child, dressed in white with a red nun-like head covering, pulling on the cord to ring a bell. The Empress shows a mother holding her baby, seated in front of a fireplace. The Lovers shows a young girl, in a beautiful white dress, kissing a young boy (who is standing behind her and to one side) on the cheek.

The Hermit is hysterical – a female figure in the form of a watering can, watering the flowers. Justice is a bit more chaste, showing a defendant (in a red and white plaid suit) standing in front of a judge with his lawyer. (The lawyer actually looks a bit like a shyster!)

The Moon is beautiful card, with a nicely dressed mother and her two daughters, walking along a trail. The mother is caller her daughters attention to a full moon in the sky (which is wearing a smiling face).

The Devil is just adorable, showing what appears to be a woman’s show, with four little “Devils” appearing to be either playing on it or working on it. The Six of Swords shows a mother standing up in a boat, oar in hand, her young son and daughter seated on the back with their feet in the water.

Then we come to the Happy Squirrel! This card is done is sepia tones, showing a squirrel standing on a tree branch, with an acorn in his paws. On the top left hand side of the card we see a circle with an acorn in it, with the word “Acorn” emblazoned across it. This seems to be the name of the company selling the product (stoves and ranges).

The imagery in this deck is quite colorful, and quite well done. It varies from comic book comedic to true to life figures. It is a joy to read with – perhaps not a deck that you would offer a client, but certainly a deck that a reader could have some fun with! Not a deck for learning – but it is quite unique, and gives great pleasure.