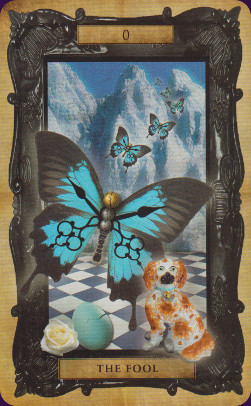 The Victorian Steampunk Tarot is a semi-illustrated 78-card tarot from tarot author Liz Dean, who created the Art of Tarot. Each of the major arcana is a collage of steampunk-related elements, while the minors are arrangements of the suit element and symbol (Dragonflies, Bees, Beetles and Moths). 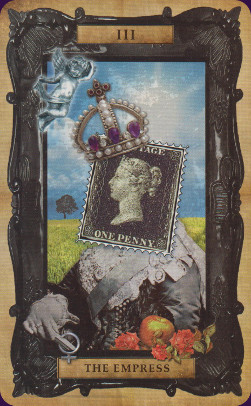 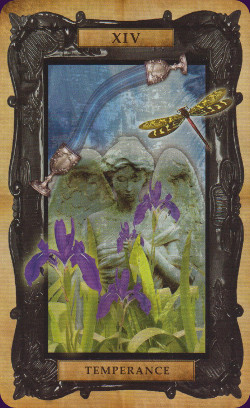 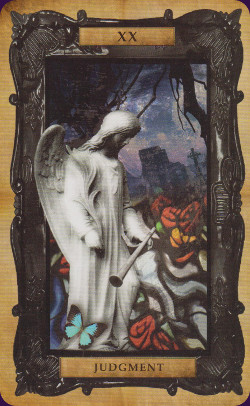 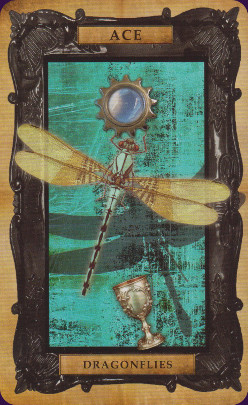 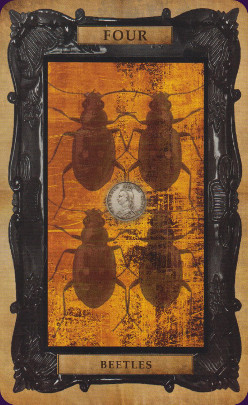 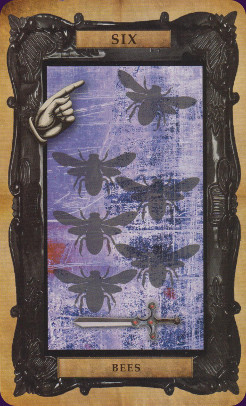 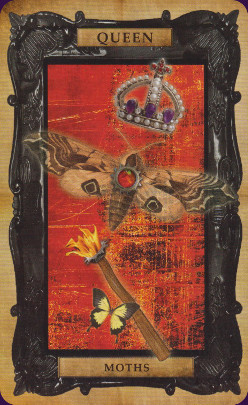 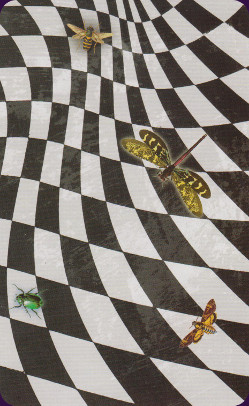 Steampunk is a sub-genre of Speculative Fiction set in periods of alternate history, most notably the Victorian era. This allows writers to place their stories in a fantastical universe where technology and machinery are largely steam- powered. There are many easily recognised conventions in Steampunk and Steam-art, from the inevitable clockwork cogs and gears decorating everyday fashions and objects, the inevitable brown Victorian clothing, dirigibles of wafting through the sky, fantastical gadgetry and vehicles, and London smog.

Several Steampunk tarots have already been published, most notably Aly Fell and Barbara Moore's exceptional deck - which has set an almost impossibly high standard against which other Steampunk decks will inevitably be measured. The Victorian Steampunk Tarot kinda, sorta careens around the edges of genuine Steampunk, but never fully immerses its self in it, or Victoriana. Sure, there are the ubiquitous clockwork wheels - the all-purpose allusion to steam, and the occasional genuine Victorian image or artefact - But the collages that make up the images in this deck are basically lightweight.

This is a 78 card tarot, with 22 Major and 56 and Minor Arcana. Only one card in the Major Arcana has been renamed - The Flying Machine has replaced The Chariot in image if not in essence. Otherwise this is a standard Waite Major Arcana. The Minor Arcana are pip cards, with thoroughly unimaginative Court cards scarcely differentiable from the number cards. The Suits have been renamed - Cups/Water now being Dragonflies, Wands/Fire now Moths, Swords/Air is now Bees, and Pentacles/Earth renamed Beetles.

The cards themselves are extremely good quality. They measure 80 x 130 mm, fractionally larger than standard tarot cards. The card stock is good; flexible, smooth, with a high gloss finish. They shuffle well, being neither too slippery or prone to ‘clumping’. The print quality is excellent - the images are clean and clear, with vibrant and strong colours.

The art style is digital collage, with some images put together quite charmingly while others have an air of artistic indifference. The Major Arcana utilises symbols that echo those used in the Rider Waite Smith Tarot. The pip cards are relatively uncomplicated – the insects are portrayed in shadow form, with additional prompts in the form of tiny swords, coins, goblets, and flaming brands. The Court cards are differentiated by a crown, shield, or feather. Each image is bordered by a dark picture frame set on a sepia background. The print on the back is a vertiginous chequerboard dotted about with insects, and is not reversible.

The box the cards and guidebook come in is made of solid cardboard with it’s lid held shut with a magnetic clasp. The box is bright blue with gold foil titles, and printed with glossy reproductions of some of the Victorian Steampunk Tarot cards.

The guidebook by Liz Dean is quirky and informative. The Introduction is fairly de rigeur giving only a fleeting overview of Steampunk and tarot. There is information about how to use the deck – tuning to the new deck, protecting the cards, shuffling the cards. There are half a dozen layouts including a 3-card draw, Spirit Messages, Ask Three Times, Too Answer A Question, The Week or Year Ahead, and of course the Celtic Cross. The chapters on The Cards And Their Meanings covers upright and reversed meanings for all the cards – and these are fairly standard interpretations. The Major Arcana chapter has additional information about the symbols used in the images, Elements, Planets, Keywords, and The Message – a brief summary of the upright divinatory meaning.

In spite of the fact that there is very little Steampunk in the Victorian Steampunk Tarot – this is a bright and attractive deck. It is usable and very functional. If you are looking for Steampunk then you may be disappointed but if you are looking for a cheerful, user-friendly tarot deck then this will satisfy your needs. In spite of being quite uncomplicated it is probably not the best deck for beginners; however if you are an experienced reader then this deck will be easy to master. All in all very pretty cards worthy of any collection.