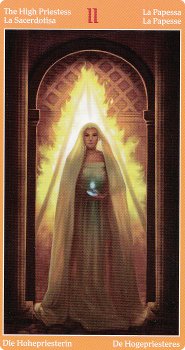 The Fire Tarot takes the myth of fire in all its forms and interprets it through tarot-related scenes. The major arcana each depict a god linked with fire, while the minor suits are linked with fire as help, spiritual and sacred fire, emotional fire, and earthly fire.


Card Images from the Fire Tarot 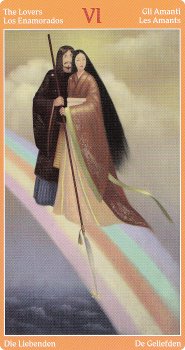 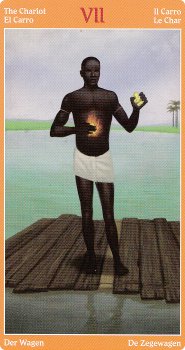 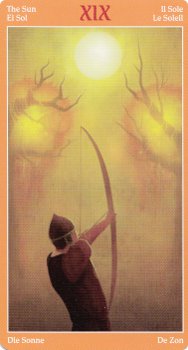 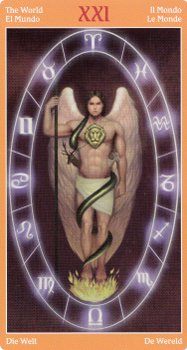 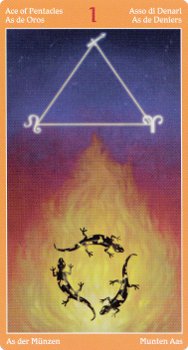 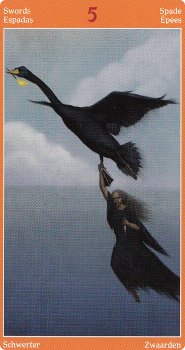 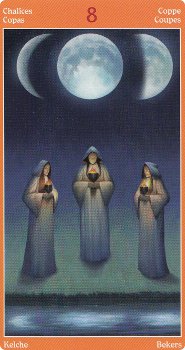 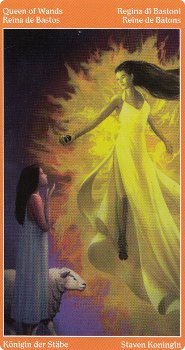 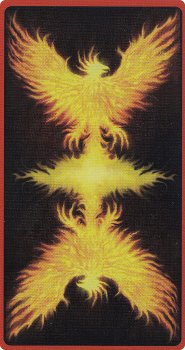 According to the creators of the Tarot of Fire, it was fire among the primary elements, that put humanity on the path to civilisation. This tarot deck focuses on worldwide myths of fire; gods and goddesses, elemental beings, animals, and even abstract concepts are all players in this vast meditation/exploration. This is an absolutely fascinating tarot, brilliantly conceived and exceptionally well executed.

The Major Arcana concentrates on some of the most potent fire myths from world cultures – there are powerful and familiar mythical figures such as Prometheus as the Hanged Man, Ocrisa the Vestal Virgin as the High Priestess, Osiride the Egyptian Underworld God serves as Justice, and Hermes Trismegistmus appears as The Magician. On a more symbolic level Vesuvius destroys Pompeii in The Tower; and fire raining down from the skies burns Sodom and Gomorrah in Judgement. Not surprisingly many of these cards depict some quite forbidding characters – The Empress, Maori goddess Mahu-ika radiates strength and primal energy; Moloch the Devil is the horned monster of legend, and Dreamtime figure Karakarook is an extraordinarily commanding Hermit.

The Minor Arcana traditionally associates each suit with an element – but the Tarot of Fire looks at the different forms the elements take in association with fire. Cups examines the ideas of divine fire, particularly in relation to emotions. Fire in the suit of Pentacles can destroy or purify; in the suit of Swords fire assumes the role of a double edged sword, it can consume or create, and represents the extremes of love and hate. Wands, traditionally the suit of Fire examines the relationship between man and nature, the sacred and divine role that nature has in the evolution of humanity.

This is a fully illustrated, traditionally constructed tarot deck – 78 cards, 22 Major Arcana and 56 Minor Arcana. There are no changes to titles of the Majors, Suits (Cups, Swords, Pentacles, Wands), or Court cards (King, Queen, Knight, Page). The cards measure 65 x 120 mm – which makes them very much a standard sized deck. The card stock is good, mildly flexible, low sheen and very smooth. The cards are easy to shuffle, a little slippery or perhaps an exceptionally responsive deck. The quality of the print is excellent – clean and clear with a lovely spectrum of colours.

Artist Franco Rivolli has employed a naturalistic style in portraying the extraordinary as it imposes itself on the mundane world. Many of the scenes take place in darkened environments, thereby highlighting the brilliant and luminous quality of fire. The artist’s palette accordingly tends towards sombre colours – browns, greys, dark blues and deep purples, highlighted with glowing reds, yellows, and oranges.

The images are bordered in orange. The card numbers, in deep red, are at the centre top of the cards. The titles, in small stark white print are in six languages, located at the corners of each card. The design on the back of the cards, a double Phoenix, is fully reversible. The packaging is a small cardboard box printed with the images from the Tarot of Fire. It is fine for storage but will not withstand rough treatment.

The 63 page Little White Book has instructions in English, Italian, Spanish, French, and German. The Introduction is concise but very helpful in explaining the concept, and execution of the Tarot of Fire. There is a description/explanation of the scene on each card, and a divinatory meaning for upright cards only. This is a highly idiosyncratic tarot and any reader will be heavily reliant on this LWB in order to interpret the cards. There is one layout included – The Five Flames – which is designed to maximise the unique possibilities this deck offers.

If you are an experienced tarot reader or collector, looking for an intelligent and exceptional deck I cannot recommend the Tarot of Fire highly enough. This is a very well thought out and truly original deck.