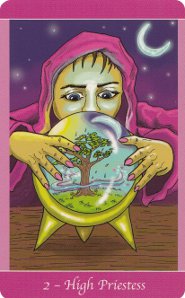 The Simply Deep Tarot is a new deck from artist James Battersby and Chanel Bayless, who previously collaborated on A King's Journey Tarot. It has vibrant paintings, designed to easily connect the reader with the traditional meanings. 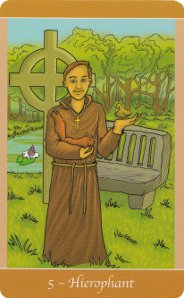 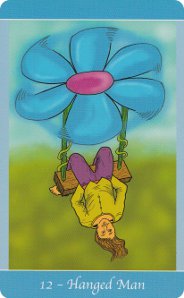 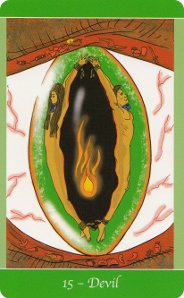 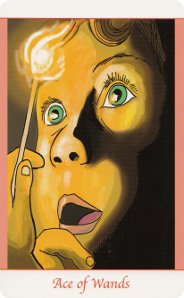 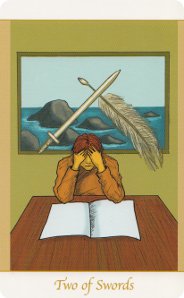 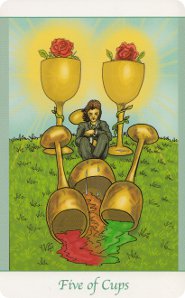 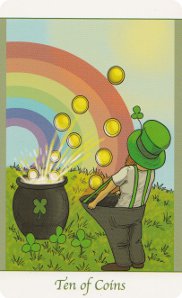 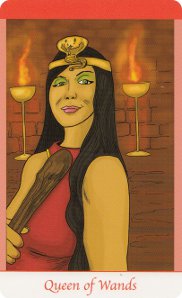 The “Simply Deep Tarot” follows the traditional Rider-Waite format, with 78 cards, traditional titles for the Major Arcana, Strength at VIII and Justice at XI. The four suits of the Minor Arcana are entitled Wands, Cups, Swords, and Coins, with the Court Cards entitled Princess, Knight, Queen, and King.

The cards come in what is coming to be viewed at the “traditional” Schiffer packaging – sturdy lift-top box, with a magnetic lid. The coloring on the box and the 96 page book are blue/green, representing the emotional realm of life. The cover of the box shows the “ghost” of a female figure, cards in hand. The back of the box carries background information on the deck.

The purpose behind the “Simply Deep Tarot” is to take the reader deeper into the cards on an emotional level, while still providing a connection to everyday life. In her introduction, Bayliss indicates that she sees the Tarot as a window into the soul. This window has many layers, layers that Bayliss sees as emotional memories, and the reader needs to be able to penetrate these layers to gain the most from the cards.

Isolating and exploring each individual emotional layer is the technique that Bayliss recommends. A hint that she gives is to remain detached, so that one does not become afraid of the wisdom they are accessing. She also suggests that the reader be very aware of their own energy during a reading, to the extent that information is given on working with the chakras and energy.

Spreads were deliberately not developed for this deck, as Bayliss wanted the reader to go deeply into each card to pull out the meaning. Spreads are developed with the idea of accessing the story, and Bayliss feels that this can be done, and is done, as the reader accesses each successive layer of the cards.

Each card is presented with a small black and white scan, keyowrds, and upright and reversed meanings.

In her conclusion, Bayless writes “Understanding the roots of our emotional and spiritual origins is the number one best thing that we can do to understand all of the choices that we’ve made in life, that we will make in life, and that will affect the direction of the path that lies before us at this exact moment.”

The coloring on this deck in in depth, with the suit of Wands coded peach, the suit of Cups blue/green, the suit of Swords a yellow/green, and the suit of Coins a light green. The Major Arcana cards are coded to their elemental quality. The art style is somewhere between fantasy and reality, with the imagery not always following traditional lines.

The Fool is shown walking a tightrope between two sides of a canyon, while his dog watches from the bottom, near the river. The Empress is seated on a swan, while the Emperor stands with a scroll in his right hand, and his left hand holding on to what looks to be a pipe, with a wheel on the top. I love the Hierophant, who is pictured in a brown robe, with a squirrel under his right arm, and a bird seated on his left hand.

The Lovers shows a formally dressed couple having a picnic. The Chariot shows a young person standing in a ray of sunshine, his arms outstretched, with loose ropes tied to each wrist, leading to the side of the card. Strength is actually seated on t he lion, whom she has muzzled. Justice shows an individual seated on the right hand scale (as we view the scales), while seated on the left hand scale is a figure in a red robe with white collar and cuffs, a sword in one hand and an open book in the other.

The Magician both draws me into the picture, and makes me wonder. We see a figure seated at a table, in a blue, hooded cloak. On the table in front of him is a candle, a book of spells, a knife, a pencil, what looks to be a bowl of pebbles, or perhaps coins, and a flower in a vase.

The World shows a tree against a night sky, with the world cradled safely in its trunk. The Ace of Coins shows a coin, with a male and female figure on it, and a plant growing up from it.

The Six of Swords is another puzzling card for me. The figure of a child sits in a boat that is being manned by a figure in a long, brown, hooded cloak. This cannot exactly be an ocean, or even a river, as a spigot is running water in on the left hand side of the card. The boat isn’t going anywhere anyway, as the six swords are planted firmly in the water in front of its bow.

I love the Nine of Swords! We see an individual, sitting up in bed, head in hands. Above him/her are seven swords, each with its own little “thought cloud”. The thoughts are: Why me? Out to get me. You will fail! Worry. Gossip. I’m not good enough. Will I get in trouble? It won’t work. And What will happen?

The Two of Wands shows a painting, sitting on an easel at the shore. Two paint brushes hover in the air in front of it, while we see a turtle in the sand to one side. The Queen of Wands shows a very happy lady, in a bright red dress, with a wand in her right hand. She is standing between two burning cups. The Three of Wands shows three hands, each holding a match. The top two matches are lit, with the bottom match being held up to be lit by the upper matches. The King of Cups is very prototypical, with the King seated on his throne, full cup in his left hand.

This is a deck that can be easily worked with, and that might appeal to children, if the reader works with children. It is a deck that, along with its companion book, can expand the nature of a reading.