Inspired by the spiritual alchemy of the Rosicrucians, the Alchemical Tarot is full of alchemical symbolism and explains "the beliefs of the elixirs that make up the substance of life." Card art is hand-drawn in style reminiscent of comic books. Now reprinted as the Alchemical Tarot: Renewed.


Card Images from the Alchemical Tarot 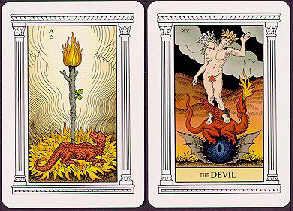 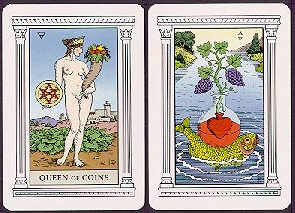 After reading for nearly 30 years with various Rider-Waite Smith decks, and experimenting with several others, I wanted something new, stimulating, but not completely untraditional. As an intuitive reader, I have a great deal invested in the imprinting I've done on the Rider-Waite-Smith cards over the years, but was looking for imagery that would challenge and refresh my perceptions.

I spent many hours scanning decks and reading reviews, but did not feel that "ah ha!" pull until I happened across Place's website. I felt an immediate connection to both his artistic style and his philosophy. The book he co-wrote with Rosemary Guiley offers a wonderfully accessible introduction to the history of alchemy, its influence on philosophy, metaphysics, and scientific method from ancient times to the present, and then draws reasonable, non-dogmatic parallels between the structure of the Tarot and the stages of alchemical process. This leads to some dramatic re-interpretations of the imagery, strange to the eye at first, yet deeply meaningful after even a brief perusal of the companion text.

Like many recent artists, Place plays with the suits a bit. Cups become archaic looking jars and alembics, Pentacles become historic coins, and his Staffs burn rather than sprout leaves, which reinforces their elemental value, though it does take some getting used to. Swords remain swords.

There are significant changes to some of the Major cards, as well. Place's Hanged Man is a struggling figure, rather than the more common beatific figure. Death is depicted as a skeleton holding an arrow and standing on a blackened vessel. It is a harsher image than the RWS Death, and closer to the old Italian and French decks, but carries the same modern significance. The Star is perhaps the most potentially startling: it shows a double tailed mermaid expressing milk and blood (alchemical metaphors for mercury and sulphur, which in turn are metaphors themselves) into the waves.

There is a great deal of nudity in this deck, yet there is nothing prurient about it. Nudity represents revealed truth. Some figures are completely revealed, others partially, while others, like the High Priestess or Fool, are bundled right up to the chin, guarding their knowledge. Place's classical style makes these figures of art, not sexuality. There is a healthy amount of sensuality in certain cards, such as the Empress or the Star, but it is in keeping with the flow of energy and to my mind, both appropriate and beneficial.

There is also a nice balance of genders. Pages become Ladies, and while women are perhaps a bit scarce and traditionally placed in the Minors, they are well represented. Place has chosen to make the Kings animals, however, something I have not seen elsewhere. Cups becomes a whale; Swords an Eagle; Staffs a Dragon; Coins a Lion. This is the the only element of the deck which I found to be a significant distraction.

A plus is the level of detail and activity in the Minor cards. Like the RWS deck, every picture suggests a story containing the various elements of its meanings. While some find this iconography to be limiting, I consider them windows onto a wide subconscious landscape. Unlike a themed deck, in which something like a cat is jammed into every card, Place's minor give pertient scenes, incorporating only elements which further the depth of meaning.

In the Major Arcana, Place develops a loose linear story, in which the Emperor and Empress play their roles in following cards--standing together as the Lovers, joined in a double headed hermaphrodite on the Devil card (one of the more innovative changes, again derived from alchemical philosophy), ascending on Judgement Day, etc. He has also toned down the more overt Christian symbology. You can still see some if you look for them, but it is perhaps less off putting for those who not drawn to these elements.

Another plus is the interpretations offered in the companion book. Many recent authors have smoothed the rougher edges of Waite's attributes. Some of the newer, feel good interpretations are downright bland. While Place and Guiley have brought a modern, more psychologically based tone, there is still a good healthy contrast of light and shadow here.

I would recommend this deck to any serious reader, but especially to those who echew New Age pseudo mysticism, forced themes, or kitsch-for-its-own-sake artsiness.