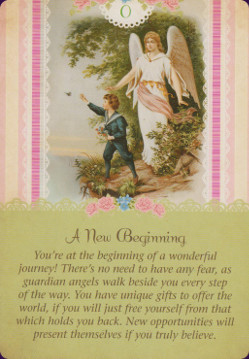 The Guardian Angel Tarot Cards is a tarot deck for the 'highly sensitive' from New Age author, Doreen Virtue, which continues the gentle and sweet theme of her earlier decks. Each of the 78 gold-edged, simplified cards features an angel illustration and a positive explanation printed beneath. 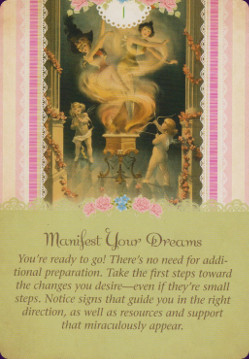 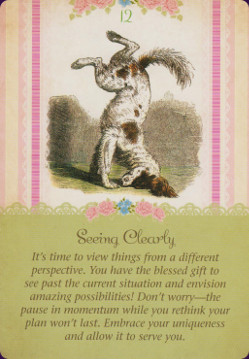 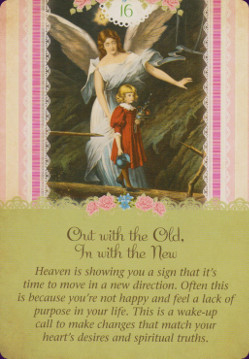 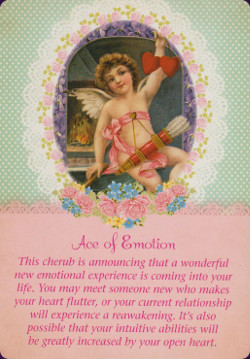 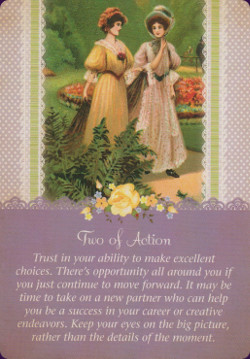 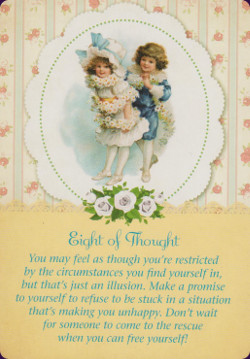 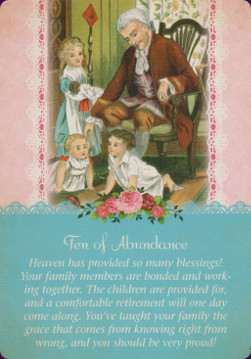 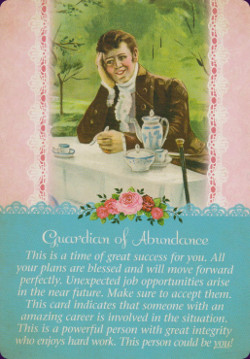 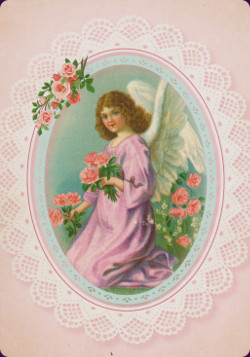 This is a standard Doreen Virtue cards and book in a box set. The card design is more consistent and realistic then in Doreen Virtue’s previous decks. It gives the impression of sweet Victorian postcard images or old paintings. Because of this I think this vintage illustrations style is good step forward for Doreen Virtue in general.

I really like that in this deck the angels’ presence is subtle and angels are often invisible, like in real life! Instead the focus is on human characters. Even when you can’t see angels in real life or on your cards they are there, and that’s a good thing! This deck has chubby angels on the Aces and a few other cards. After thinking about it I find it more acceptable because this little cuties are like kids. And kids can represent beginnings and that fits well with aces!

The card back motif is pink with an angel and flowers similar to front box design encircled with blue pink and white lace. They are not reversible but look nice in a spread.

As far as the card design, all the cards are divided in two parts; upper is the card image framed in lace and placed over a wallpaper style background. The bottom is plain color with card name and accompanying short text. The text and background color, wallpaper and lace, are distinctive for each of the suits and majors which makes it easy to recognize and memorize cards.

The Majors are in traditional order with Strength as 11 (cute girl with a cat!) and Justice as 8 (Fair unicorn!). They are easily distinguishable from the Minors because they have Roman numerals on top while numbers on the Minors are arabic numerals so everyone knows them on the spot! Here we see traditional tarot Majors redesigned and renamed starting from 0 The New Beginning, which is a kid and his guardian angel. My favorites here are 3(empress!), 5(teacher with a kids!), 6 (seems to be an old royal wedding!) I really “get” all of these but for 7 I would prefer a real chariot here instead of a bike! So we may say these changes often work wonderfully but in other cases just don’t seems to fit on first sight. A good example is that Temperance is here called Win-Win and we see two old folks sitting on a bench and talking. This may seems bit *unusual* but the card’s text gives an explanation and the guidebook sheds more light on it. So some of the cards’ meanings are seen in a new light and that always welcome and refreshing!

Minors are renamed to Action, Emotion, Thought, and Abundance. I find this acceptable because that’s how I usually interpret them so why not name them this way?

The suit of Emotions has pink text on a pink background. Design elements include white lace, blue dotted wall paper and flowers. This is so romantic, like old England! My favorites are Four and Five. I could almost see Jane Austen and Mr. Darcy on these cards. The design schemes for the other suits also seem to fit their themes.

The Courts are here renamed the Messenger, Helper, Healer, and Guardian, of each suit. Their meaning is mostly the same as we are used to. Messenger and Helper don’t seem too different from Page and Knight. Healer and Guardian show new aspects of King and Queen that I may take in consideration for future readings. The images used for the Court cards are eye catching and make me think they must be from real portraits or old paintings.

The book gives a good introduction to tarot in general and to this particular deck as well as a few standard spreads and more information for each card.

In my opinion this deck is perfect for beginners. It is probably the best starter kit on the market because the changes were made "in order to make them very easy to interpret and understand." The book is also perfect for beginners. There are no scary images and no nudity (except for cherubs/putti) which makes it appropriate for all ages.

All the characters in the deck are lovable and you would like to hug them all! That was probably intentional because in readings this deck gives exactly that energy. I can best describe it as like feeling your good old granny tapping your head saying "there, there my darling, maybe disaster is on the way (because no matter how cards are named or shown we all know their meaning, right?) but there is no point in worrying about it! Put on a smile and hold your strength because there is no other way then to be prepared and get through it. Aim forward to a happy future!” And that’s just what we all need in troublesome situations when feeling depressed or not knowing what to do, that warm hug and a little push.

Some people complain about how "cheesy" Doreen Virtue’s decks are. They say that something too positive can be annoying sometimes (seriously like that’s possible?) but I think this deck design is the best we’ve seen so far. Most importantly, it brings happiness just looking at these cards! The energy I receive from this deck is totally uplifting and positive. It’s obviously created with much effort and intention to spread happiness. I find the deck especially great for professional use since everyone reacts very positively. (You know that look when I draw cards 15 or 13, well say good bye to that!)

The same day my deck arrived I got wonderful news regarding my dear person, and good things started happening. I generally consider it a good sign when I’m so happy at receiving deck and holding it in my arms. I feel like it’s my birthday present and cake all at once!

If I could make changes to this deck I would want a borderless version with larger images and without text. One word/name for each card is enough for me. I would love to see titles on the Minors like in the Crowley Thoth deck, as well as distinctive design scheme for each type of court cards. Hopefully we’ll see that in some future Doreen Virtue deck. This deck really raised the bar of my expectations!

Review written by Reall, and edited by Myrrha

This a beautiful deck of cards for highly sensitive people. You might think it is too gentle but it really isn't. They changed the suits from Wands to Action, Cups to Emotion, Swords to Thoughts and Pentacles to Abundance. The people have been changed to Messenger, Helper, Healer and Guardian.

I liked the feel of the deck. The cards are oracle size and made with strong stock, the box is sturdy and they have beautiful golden edges. There is a nice guidebook that comes with the cards and includes explanations for each card plus A few nice spreads one can use to read with.

The art work is delightful Victorian also called shabby-chic style but no one's name was mentioned who did the art work. The backs of the cards are pink with lace, flowers and an angel inside an oval in the middle of the card. Very pretty.

I enjoyed the gentle messages on the cards although there are messages like "you may need to change your path but that doesn't indicate anything other than the need for a course correction" and "change can be challenging but it can also be exhilarating". Other messages talk about compromise instead of focusing on your differences and "sometimes it can be very difficult to make a choice", so as you can see these cards are about everyday life.

I love these cards and will use them often.