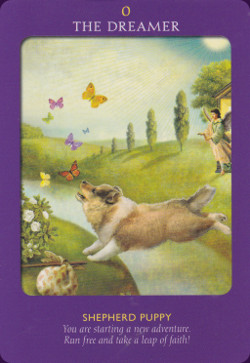 The Animal Tarot Cards is a 78-card set from Doreen Virtue, designed to give the reader heavenly guidance via animal guides. The cards have rather attractively illustrated animal scenes, with an interpretation printed below. 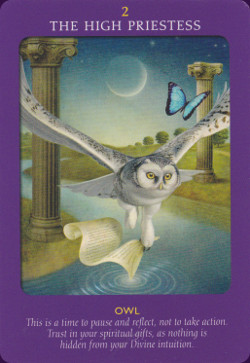 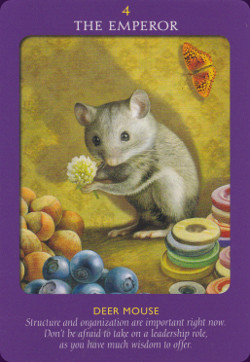 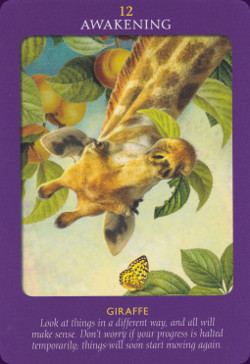 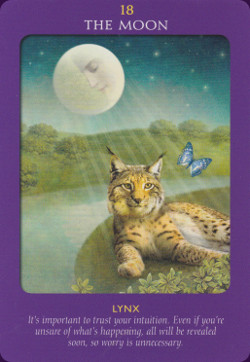 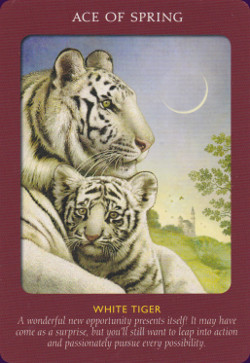 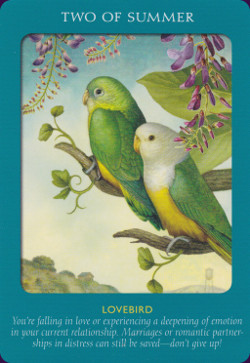 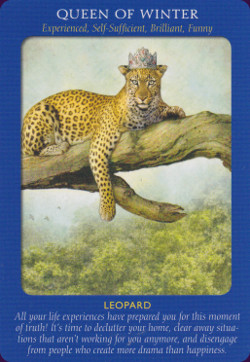 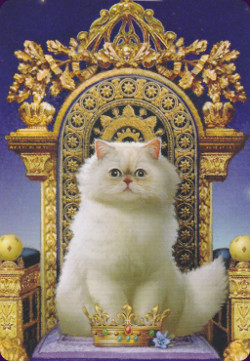 Earlier this year Doreen Virtue announced her conversion to Christianity, moving away from her previous new-age teachings and disassociating herself from practices such as channelling and mediumship, denouncing her own teachings, and repudiating the tarot in particular. It is surprising then to see the Doreen Virtue and Radleigh Valentine Animal Tarot Deck being published well after this spectacularly public about-face. In a move which seems suspiciously like trying to have your cake and eat it too The Animal Tarot is described as providing heavenly guidance via animal guides when you are too stressed out to receive guidance directly from God, Jesus, or angels.

The deck itself is a straightforward 78 card, fully illustrated tarot, with 22 Major Arcana and 56 Minor Arcana. Several of the Major Arcana have been renamed; The Fool is now The Dreamer, The Hierophant is now Unity, Justice is retitled Awakening, Death is now Release, Temperance is retitled Balance, The Devil is now Ego, The Tower is now called Life Experience, and Judgement is retitled Renewal. The structure of the Major Arcana has Justice as the eighth card and Strength as the 11th card in an effort to restore flow to the "spiritual-path story". The suits too have been renamed; Spring, Summer, Winter, Autumn representing Wands, Cups, Swords, Pentacles respectively. The Major Arcana and suits are all colour-coded with the Majors being purple, the suit of Spring is burgundy, Summer is teal blue, Winter is royal blue, and Autumn is emerald green.

Each card depicts an animal or insect in a situation which appropriately illustrates the meaning of the card. With the sole exception of The Magician which is represented by the mythical unicorn, all the animals are real creatures.

The cards measure 98 x 128 mm which makes them a little broader than the average tarot deck, closer in size to an oracle deck. The card stock is quite dense making the deck thick and heavy. It is, however, flexible, with a smooth and glossy finish which facilitates easier handling and shuffling which is vital given the bulkiness of this deck The print quality is excellent, with the fine details and subtleties of colour reproduced with clarity. There are no misprints, no colour bleeds, and no blurriness to these images.

The artwork is by noted artist Dan Craig. His palette is broad and nature-based, featuring virtually every hue under the sun. There is a degree of soft focus to his finely detailed images which depict animals in both natural and fantasy settings. Each animal is illustrated with meticulous attention, and while some are sentimental and perhaps a little 'chocolate-boxy’, others display a charming humour. Craig's ability to capture movement and environment is superb. There is another curious quality to these images which is that some are quite clearly the hand of a deft and skilled artist while others have the tell-tale blurriness, curious outlining, and strange montage appearance typical of digital artwork.

The cards have broad, colour-coded borders surrounding each image. A number in pale yellow, and the card’s title in white are placed above the illustration, while below it the name of the animal in the illustration is also given in pale yellow. Below this in white italics are key descriptors which summarise the divinatory meaning of the card. The image on the back of the card shows a fluffy white cat sitting on a throne, with a crown before it. This image is not reversible, however given that no reversed meanings are given for the cards in the guidebook it is safe to assume that these cards are not intended to be read in any but the upright position.

The cards come packaged in a close fitting, solid cardboard box with a lift off lid. The box has a glossy finish and features images and details from the Animal Tarot Cards, as well as details regarding the deck and publishers information. The inside of the box is finished in pale apricot and features a butterfly imprint at the centre of both the base and the lid. This box set, although a little weighty, can easily be dropped into a tote bag or backpack and taken on the road. The box is sturdy enough to protect the cards and guidebook, however if it is handled roughly, or squashed it will sustain damage, it is still cardboard after all is said and done.

This box set is accompanied by a 189-page guidebook written by Doreen Virtue and Radleigh Valentine. The authors, one a committed vegan, and the other a vegetarian commence their introduction by expressing their love for animals and commitment to animal rescue. This is followed by an explanation of animals as spiritual guides, and how these guides can manifest in the Seeker’s life in the spirit of a deceased beloved pet, as a recurring image in social media, or even a frequent turn-up in card readings. The authors clearly state that these cards are compatible with other Virtue and Valentine tarot decks.

There is a brief description of how tarot can "… create a pipeline to heavenly guidance for you,". This is followed by details about the structure of the tarot deck, including the differences between Major and Minor Arcana cards, the purpose of Court cards, and some brief historical notes. The chapter on Using Your Animal Tarot Cards gives instruction for clearing your cards, preparing them for use, asking a question, how to shuffle the cards including a prayer to say while you are doing this, a method for choosing a card, and exhorts the Seeker to use the guidebook for details on the divinatory meanings of each card. There is instruction for a 3-card layout as well as the Celtic Cross spread.

Each card has its own separate mini-chapter featuring a small black-and-white reproduction of the card. Beneath the number and title of the card is a short paragraph which summarises the essence of the card and gives some key phrases. This is followed by a description which details the nature of the animal depicted, this includes why and how it relates to the story of the card. The divinatory meaning is implied in the description, and to some extent the Seeker is left to intuit which pieces of information are relevant to their reading. The interpretations supplied are very much in line with generally accepted divinatory meanings of tarot cards and err on the side of positivity. There is nothing radical or wildly progressive included here.